DEPENDENCE on a drug famously prescribed to stressed-out housewives in the 1970s has reached epidemic proportions in Scotland, police have warned.

The use of Diazepam, better known as its former brand name of Valium, has become so widespread that organised gangs have started selling the tranquilliser over the internet to desperate Scots – for as little as 50p a pill.

Senior police officers have warned that Diazepam has become the drug of choice for stressed-out professionals and anxious housewives, as well as being used recreationally by youngsters. 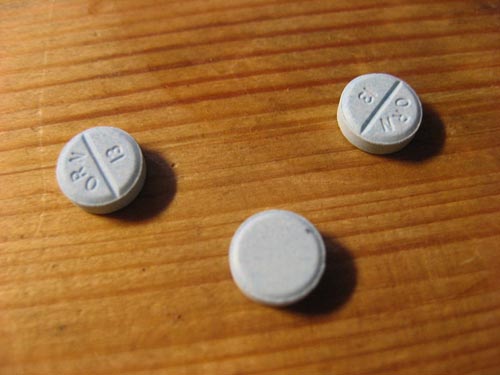 Although available from doctors on prescription, growing numbers of Scots are choosing to self-medicate and are buying Diazepam over the internet, putting themselves at risk of purchasing un-regulated drugs which could be contaminated with hazardous and unclean chemicals.

Kenny Simpson from the Scottish Crime and Drug Enforcement Agency (SCDEA) said organised crime gangs were producing and dealing with thousands of Diazepam tablets to meet demand for the drug.

He said: “We know from our intelligence operations that this is a significant problem. Organised gangs have moved in because there is huge demand for the drug across the social spectrum. The widespread abuse of Diazepam is a significant issue at the moment and I have concerns over its role in drug-related deaths,

“The drug trend picture shows an increase in the availability of illicit Diazepam, coupled with low prices and the prevalence of ‘poly’ drug use, creating potential for an increase in fatal overdoses,”

Many people are unaware that they could be putting their lives at risk by taking Diazepam, particularly if mixed with alcohol.

Figures due to be published this week by the General Register Office for Scotland are expected to show Diazepam features in a worrying number of drug-related deaths.

The side-effects of the drug, which caused 93 (19%), of the country’s 485 drug related deaths in 2010, include drowsiness, weakness and impaired concentration.

Drug charities warn there is an alarming rise in cases of “super-dosing”, where people take vast quantities of Diazepam that far exceed a prescribed dose and can result in violent, sometimes fatal, seizures.

Charity, Addaction, said it had come across users claiming to have ingested 500mg of the drug — 100 times a normal dose.

Alistair Ramsay, director of Drugwise, a drugs advice company, said: “The widespread availability of Diazepam on the internet is an issue. It comes in all sorts of forms — pills, gels and powder. The problem is more people are self-medicating and they don’t know what they’re buying, the strength of the drug or how it will affect them.”

Professor Sheila Bird, an authority on drug abuse with the Medical Research Council, said: “Diazepam should be properly prescribed and the concern is that the pattern of use of this drug is changing and may be contributing to drug-related deaths.”

Dr Roy Robertson, an Edinburgh-based GP who is the chairman of the National Forum on Drug-Related Deaths, said: “Whether or not Diazepam itself causes death is a matter of debate but it is being linked to drug-related deaths. People are self-medicating with a variety of drugs from the internet. It’s a problem that extends into the general population.”