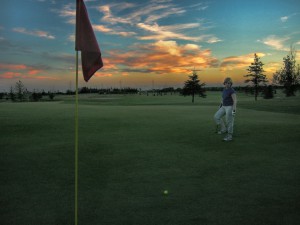 ONE of Scotland’s most elite golf clubs has been condemned for its “appalling” ban on female players.

Muirfield, East Lothian, which charges up to £250 a day for a game, hosts the British Open next year but still refuses to admit women.

Known formally as The Honourable Company of Edinburgh Golfers at Muirfield, the club was today branded “out of touch” for its controversial males-only membership.

The criticism followed the decision of top US club, Augusta National, Georgia, to end its ban on female players.

Deputy Labour leader Hariett Harman condemned Muirfield and said it was time for the club to follow suit.

She said: “It’s completely wrong that Muirfield is still men-only, especially after a brilliant summer of women’s sport.

“It’s old-fashioned, out of touch and if Augusta can open its doors to women members, it would be embarrassing if Muirfield didn’t follow suit.”

Scottish actress Elaine C Smith said: “I’m appalled by Muirfield on so many levels but I suppose outside a gay disco or a circus, this is the only place men can wear a lavender V-neck and tartan trews without being laughed at by women.

“But I think it is quite sad that we have this last bastion of another age in Scotland.”

The Scottish government, while not naming Muirfield, made clear its displeasure.

“The Scottish Government is committed to promoting equality of opportunity for all people living in Scotland, and ministers believe that all golf clubs should be open to more men and women.”

Other Scottish clubs which continue to refuse to admit women include the home of golf itself, St Andrews, Fife, and Royal Troon, South Ayrshire.

Muirfield is currently in the firing line because it will host the Open in July next year, drawing crowds of up to 105,000, huge international TV audiences and the best male golfers in the world.

Catriona Matthew, the 2009 British Women’s Open Champion, said: “It would be great if Muirfield and other male-only Open venues such as Royal Troon and Royal St George’s [Kent] followed in Augusta’s footsteps in due course.”

Muirfield can trace its lineage back to the 1700s when Edinburgh ran a competition for “gentleman golfers”.

It was not possible to get a comment from the club today – because its secretary, Alastair Brown, apparently does not have an email address.

An employee who answered the phone said: “You have to write to the secretary.”

Asked if Mr Brown had an email address, the employee replied: “No.”

An R&A spokesman said: “We read the announcement from Augusta National with great interest and we congratulate Condoleezza Rice and Darla Moore on their membership.

“The Rules of The Royal and Ancient Golf Club of St Andrews specify a male membership and this policy remains a matter for our members to determine.”

“People are waking up to the fact ladies are interested in golf.

“However, it is important that we keep a middle ground as we have no issue with single gendre clubs, men and women.

“How a membership is made up should remain the decision of golf clubs.”