Parents warned a daily baby bath could cause allergies in infants

SCOTS parents have been urged to cut back on bathing babies after new figures revealed a massive increase in prescriptions for allergies.

Since 2002 the number of prescriptions for treating allergies has soared from 886,118 to 1.48 million last year, according to NHS Scotland.

Experts say daily bathing of infants is contributing to the problem by stripping the skin of natural oils that help protect against allergies. 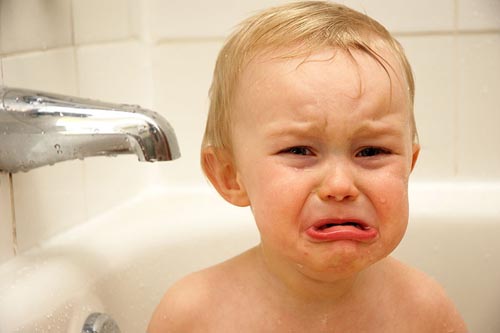 Too many baths could increase a child’s risk of developing allergies.

Despite the natural messiness of babies, they recommend no more than one or two baths a week.

One in three people in Scotland is affected by allergies at some point in their lives, costing the NHS more than £130m a year.

Over 4% of GP consultations and 1.5% of hospital admissions in the country are for allergic disease.

Professor Aziz Sheikh, chairman of Leading Allergy and Respiratory Research Group at University of Edinburgh, said early life bathing habits were one cause of an increase in allergies in children.

He warned that giving your child a daily bath removes the natural oils that protect a young child’s skin, exacerbating eczema in infants as well as increasing the risk of developing other allergic conditions.

Professor Sheikh explained: “Skin is the largest protective organ we have and early life bathing habits, especially using bubble baths, oils and soaps, will remove this protective layer of skin as a result.

“Removing surface oils from the skin not only exacerbates eczema, but increased the risk of other allergic conditions,  for example, studies have shown that using peanut-based oils and creams on a baby’s skin can increase the chance of developing a peanut allergy.”

He added: “I am sure all of it is well-intentioned but infants are being bathed more than they were even a decade ago, and giving a baby a bath every night before they go to sleep does not happen in every culture.

“I would certainly recommend reduced bathing and using simple products that have been well-regulated, and for parents to avoid using products such as oils and bubble baths.”

Dr Glenis Scadding, president of the British Society for Allergy and Clinical Immunology (BSACI), agreed that bathing an infant too frequently could make them more likely to develop eczema, in turn leaving them more open to a range of other allergies, including asthma.

She said: “The idea is that sensitisation towards allergies can occur through the skin if you break the skin or dry it out too much by using too many oils or bubble baths.

“Having eczema makes the chances of having other allergies higher. A pre-disposition to allergies is both genetic and environmental, but eczema does predispose an infant to developing allergic rhinitis (hayfever) and asthma.

“Washing the child every night is something that has changed since the 1950s, I remember in my primary class only one girl put her hand up when a teacher asked who took a bath every night. Now it is part of the bedtime routine for many parents, seen as a way to soothe a child in the evening.

“I would recommend parents wash their child once or twice a week, the problem of course is that babies do get very messy!”

A Scottish Government spokeswoman said there had been no official guidance issued on how frequently to bath an infant.

She added: “There is a book Ready Steady Baby, which is given to all parents. If people are concerned that they have very sensitive skin or eczema on the skin then we would advise against using bubble bath.”