A PUNK singer and former BNP employee claims jealous colleagues in the right wing political party smeared her online as a “devious slut”.

The 49-year-old American told the tribunal in Edinburgh this week that other BNP workers were jealous of the fact she earned a good salary while not being a member of the party.

As Mish Bondage, she is plastered across the internet wearing leather and fishnets, sporting tattoos and with bright red hair. Mrs Harrington, from Edinburgh, claims her alter-ego also offended BNP sensibilities and was used against her in a vicious internet hate campaign.

She told the tribunal: “The harassment stems from how the ideology of the party is. They are very much against open border and immigration. But look. I am foreign. I’m an outsider, a non-member. My private life as Mish Bondage shouldn’t have anything to do with my job. It doesn’t affect my qualifications or how I do my job.”

Mrs Harrington, dressed in black trousers and cardigan, claims a former colleague, who she named as Eddy Butler, wrote some of the offensive blog posts against her. She said he referred to her in one post as a “degenerate deviant slut, who isn’t really a researcher and can’t do her job. 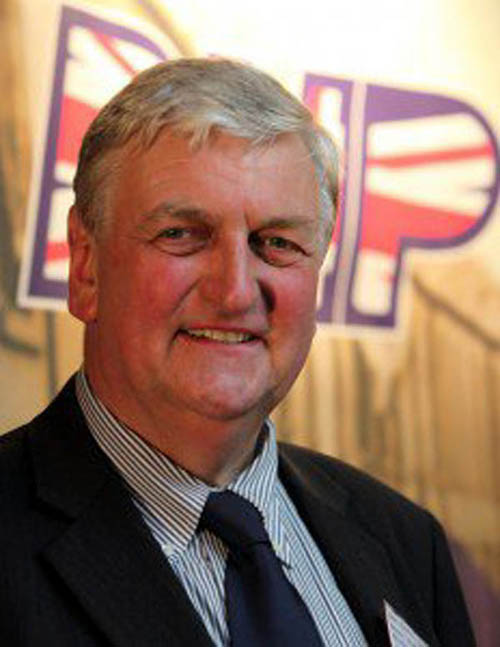 Mr Butler also attacked her band, she claimed, writing: “To say that this band is a collection of degenerate weirdoes is understating the case.”

And he provoked outrage among BNP members by claiming online that she was paid £36,000-a-year when her true salary as a researcher was £29,000.

“This is a disgusting and immoral situation,” said Mrs Harrington.

“I’ve been given this persona of a slut. They were undermining me with this propaganda. I felt like a disgusting piece of crap.”

Mrs Harrington once worked for BNP leader Nick Griffin, who is embroiled in a bitter dispute with Mr Brons after he contested the leadership. It was revealed at the hearing that Mr Griffin had travelled to Edinburgh to give evidence on her behalf earlier in the year.

“I think they both knew very well what they were doing,” she told the tribunal.

“Both Mr Brons and Mr Butler were behind the blogs. They are both responsible. Mr Brons made me the focus of a very nasty campaign.”

Mrs Harrington said she raised the issue with Mr Brons in an email written in October 2010, asking for the blog posts to be removed.

Mr Brons is said to have responded: “I won’t take responsibility for this. I’m not going to investigate it. I can terminate you, you have no protection.”

“I felt on very shaky ground,” said Mrs Harrington. “I am being threatened and publically targeted on the internet.”

She said she suffered depression and stomach problems and her health had deteriorated to the point where she may never be able to eat solid foods again. Her contract was terminated in June 2011 without any notice or reason to why she was being sacked.

She explained to the panel that it had come “completely out of the blue” and that there were no previous discussions which might hint towards the end of her employment.