SUSAN  Boyle stunned holidaymakers by putting on an impromptu show in a bar, with an audience of just over a dozen.

The star treated lucky punters in a Benidorm bar to some of her favourite numbers while out with friends.

But the resident pianist at Fratelli’s Fashion Bar in the Spanish town nearly stopped the gig in its tracks after he struggled to play the opening song, blue Moon, in the right key. 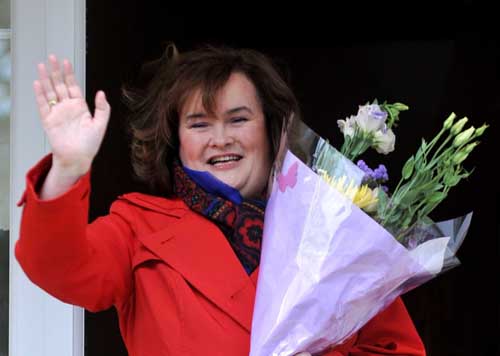 With an audience of just 12 and a handful of bar staff, the gig was on a much smaller scale than the Britain’s Got Talent star is used to.

She said: “When Susan got up to sing the staff closed the bar so that it didn’t get too mobbed and the moment was spoiled.

“People passing by probably thought she was a really good tribute act.”

Ms Allen said she and her friends were shocked to discover they were sitting right next to the 51-year-old singer.

She continued: “My friend noticed her first. She was sitting with two other women, who I think were her PA and a pal.

“The manager of the bar went over and I heard them discussing songs, and he announced Susan was going to sing for us.

“When the pianist got Blue Moon wrong her friend encouraged her to sing it a capella, but she moved on to Unchained Melody instead.

“She was absolutely amazing.

“I asked her friends if I could video it, but they said her record company wouldn’t be happy.”

SuBo revealed it was her first trip to Benidorm but she planned to visit the coastal town again.

Ms Allen said: “She told me it was her first time in Benidorm but it wouldn’t be her last.

“She seemed in good spirits and was very friendly.

“The whole experience was surreal. We were honoured to have a private performance from Susan.”

Subo had earlier been getting some “hassle” from a hen party, Ms Allen said, and had spent time in Irish bar Bodhran earlier in the night.

She enjoyed a coffee in Fratelli’s Fashion Bar, and had been to Scruffy Murphy’s earlier in her stay.

A musical about her life is set to hit the stage over the next few weeks, with SuBO herself making live appearances.