A talented 25-year-old chef has died after suffering a seizure.

“Popular” James Rehill, who worked at the Gleneagles Hotel, Perthshire, is believed to have suffered an epileptic fit.

James had been working at the prestigious hotel, under Michelin-starred Chef Andrew Fairlie, for five years. 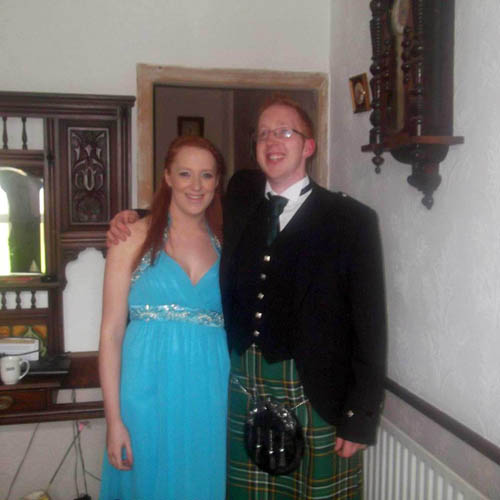 The talented youngster was a finalist in a regional chef competition last year, and was described by staff at the hotel as a “diamond of a guy”.

James, who had previously been in good health, began to suffer from seizures two years ago after he was involved in a car accident.

Despite spending some time in intensive care following the car crash, James had made a good recovery and returned to work as a chef.

But after suffering a seizure, he died in hospital on Wednesday October 10.

She wrote: “R.I.P Jimmy, gonna miss ya loads. You were a wee star, sleep tight bro.”

Georgina thanked everyone for the messages they have sent her and her family.

“Would just like to say thank you for all the text’s, Facebook messages and wall post’s it means a lot to us and we all really appreciate them.

“Thanks everyone for your support and condolence’s at this time.”

He said: “He was an immensely talented chef and hugely popular with everyone.

“When he had his accident he was in intensive care for a while and that was bad enough but to hear he had passed away was devastating.

“He came to work with us for a couple of days from Ireland and we immediately offered him a job.

“It was a pleasure watching him grow and mature.

“He was an absolute diamond of a guy. Nobody had a bad word to say about him – he was a gentleman.”

Mr Rehill was a regional finalist in 2011 in the Restaurant Association’s Young Chef/Young Waiter Awards.

Adriaan Bartels, general manager at Cliff House Hotel, said: “The team were all very shocked and stunned by it (Mr Rehill’s death.)

“He was a very nice guy. He was a fantastic chef and he had a great future in front of him.”

He said the hotel was considering developing a scholarship in Mr Rehill’s name which would be aimed at helping up-and-coming chefs.

One friend, Andy Ramshaw wrote: “Just heard the terrible news about James Rehill whom I worked with briefly. RIP Muff.”

In January Mr Rehill moved back to his native home in Ireland to become the sous chef at the five-star Cliff House Hotel in Ardmore,Ireland.

Cliff House Hotel, took to Twitter on Sunday to send a tribute to him.

It wrote: “Today we say goodbye to our dear friend and colleague James Rehill RIP. May he rest in the loving arms of Jesus.