SCOTLAND’s new curry-eating king has been crowned, after the refrigeration engineer wolfed down a bowl of the country’s hottest curry just moments before a female footballer finished hers.

Seven competitors battled it out to see who could finish a bowl of eye-wateringly hot Kismot Killer curry first, after first finishing two bowls of increasingly hot dishes. 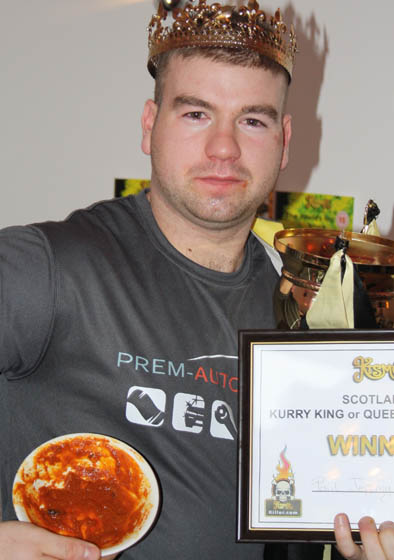 But this year, with a toned-down curry in place and doctors on hand, the only medical issues were a few contestants throwing up and the winner getting some chilli in his eye.

Shoveling spoonfuls of the curry, which is packed with Ghost and Jolokia peppers, into his mouth, Paul finished his bowl and stood up barely three seconds ahead of Dani.

The 26-year-old goalkeeper bravely took part despite having a crunch match against Paisley tomorrow.

The competitors faced three rounds of increasingly hot curry, and were required to finish their bowls without drinking milk or throwing up to progress to the next round.

One competitor, 25-year old Edinburgh man Nick Jones, joked after the first round: “I’ve had Jalfrezis hotter than that!”

After the second round the seven looked worse for wear, with Ben McClelland saying: “My mouth feels like it’s on fire!”

All seven made it through, meaning the first one to finish the last bowl would take the crown from current Queen Beverly Jones, 53.

The final round was carried in to the restaurant by chef Abdul Ali, who wore a firefighter’s hazardous material suit to bring out the bowls of curry.

Competitors had to stand up immediately after finishing their bowls, and after no more than a minute Paul was the first on his feet, followed closely by Dani, 26. 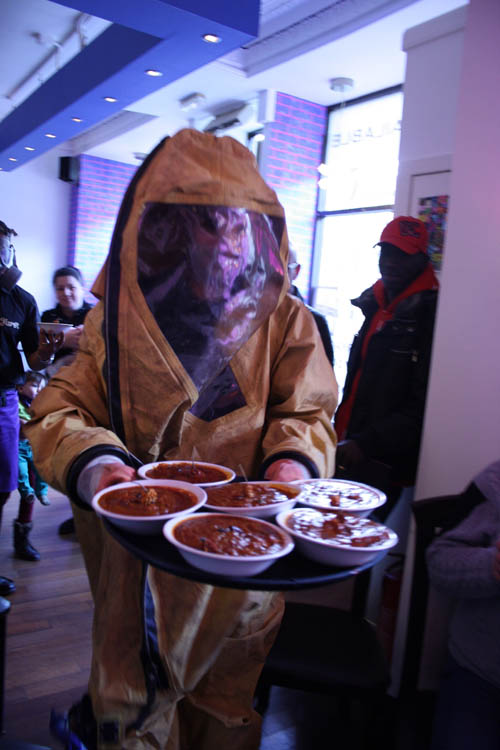 The Hibs ladies’s goalkeeper had to dash to the bathroom, and Neil Malcolm, a competitor from Longstone in Edinburgh, had to use one of the buckets provided for the contestants to throw up in.

Before the competition began, Paul, an air conditioning and refrigeration engineer from South Queensferry in West Lothian, said he was confident of doing well.

He said: “I’ve never been beaten by a curry yet. I usually get a Phall curry, but I’ve not tried the Kismot Killer before.

“I’m expecting to be putting baby wipes in the fridge tonight.”

Afterwards, a paler Paul had to bolt for the toilet before posing for photographs, and also had to use his bucket.

He had to wash his eye out with water after rubbing it with his hand, which transferred some of the stingingly hot chilli.

He said after the competition: “My stomach is cramping. I feel like a girl on my period.

“It was really sore getting it in my eye. I’ve always liked hot food, my strategy was just to scoff it.”

But he said the pain was worth it for the title: “It was good fun, it was an experience.”

year: “I think once is enough.

“The first two courses were nice and tasty but the last one gave me stomach cramps.

Third place Adrian Elliott faced an uncomfortable two-hour drive to his home in Aberdeen after the competition.

He said: “It’s disappointing, I should’ve eaten it quicker. But I’ll enter next year.”

John said: “I’d rather go 12 rounds than take a mouthful of that!”

Last year’s winner Beverly Jones warned the competitors before the last round the experience gave stomach cramps worse than childbirth.

Money raised from the competition, which included a £25 entry fee from each contestant, went to the Scottish Ambulance Service, which ferried last year’s casualties to Edinburgh Royal Infirmary.