Despite an ongoing security crackdown, huge numbers of mobiles and sim cards make their way into jails and almost 1,000 were confiscated last year alone.

The Scottish Prison Service (SPS) admits mobiles are an “effective currency” inside jails and is set to spend up to £16m on jamming technology to stop their use. 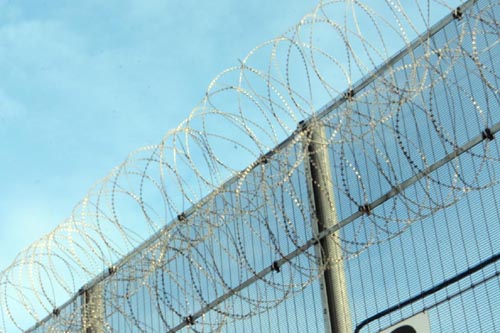 Illegally-held mobiles are a massive problem for prison chiefs because jailed crime bosses can continue to run operations from their cells.

Phones are also used to intimidate other inmates and even to log on to social media and taunt victims.

Killers Derek Morgan and Lloyd Paterson even posted a “planking” picture from inside the privately-run Kilmarnock jail.

And Michael Anderson, doing eight years for an attempted murder at a Dundee nightclub, boasted on Facebook: “8 years easy dayz.”

The SPS recently rolled out a new scheme called Prison Watch, where neighbours of prisons are encouraged to report unusual activity, such as people throwing contraband over the walls of the prison.

They have also increased police surveillance and carried out intelligence-led raids to crack down on mobile phone use.

But 959 handsets and 800 components were confiscated in 2011, and prisoners may have many more secreted away.

The mobile blockers the prison service want to install will stop any signals from reaching the jails.

The Scottish Parliament’s Justice Committee will today consider a request to be allowed to block mobile signals.

In a report to the justice committee, SPS chief executive Colin McConnell said: “|Despite [prison Watch] and other measures we deploy, illicit mobile phones enter our prisons.

“This legislation will give us the ability to block signals and effectively stop prisoners from using them, and mean that mobile phones will no longer be effective currency in prison.”

The phone blocking technology is unlikely to be used in all 16 prisons.

In open prisons, it would be largely pointless as prisoners could simply go outside to make a call.

Detective Chief Superintendent Stephen Whitelock, head of intelligence group at Scottish Crime and Drugs Enforcement, said: “We have established a national prison intelligence unit which involves close collaboration with the SPS and the eight police forces, and one of the key strands of work is to tackle the use of mobile phones in prison.”

But the Mobile Broadband Group, which represents providers, said: “The interference equipment that will be allowed within prisons as a result of this legislation has the potential to cause harmful interference to the customers of the mobile operators legitimately using their mobile devices in the vicinity.”

John Lamont, of the Scottish Conservatives, called for tougher action on smuggling: “If harder action was taken on that front, there would be no need to threaten the mobile and wireless coverage received by decent, paying customers who happen to live near a prison.”

A Scottish Government spokesman said: “The SPS have asked for additional powers to block mobile phone signals to be extended to Scotland, and we are fully behind them.”

Earlier this year it was revealed the SPS was spending £2million on security to stop visitors, outside workers and crooked guards smuggling “contraband” to inmates.