THIS IS the moment a shocked motorist discovered a cat had been hiding under his bonnet—after he had unwittingly driven it 18 miles on a motorway.

Bank worker Nick Crookston, from Dalgety Bay in Fife, was shocked to discover his feline passenger after he took his car into a garage for repairs.

The cat, Maisie, suffered burns from the engine of the Vauxhall Corsa, and was so distressed it bit through the glove of a mechanic who tried to help it.

But the bizarre find could prove lucky for the cat, as experts the animal was so malnourished it would not have lasted much longer.

Mr Crookston and the SSPCA are now hoping the stray cat’s owner will come forward.

The 22-year-old said he had taken the car in for a repair to its door, and had absolutely no idea the cat was on top of his engine as he was driving at 70 miles an hour on the motorway.

He said: “I was sitting in the garage’s reception having a cup of tea, when one of the engineers came in and said there was a cat under the bonnet.

“He took me into the workshop, there were about six or seven mechanics crowded round the car.

“Everyone had dropped what they were doing and came over. 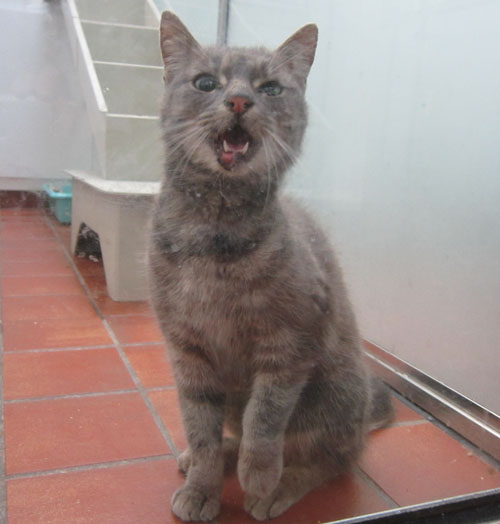 Mr Crookston said the cat could have been inside the car for as long as three days, as he did not see it when he last washed it on Friday.

He said he “felt sick” when he realised it had been inside the car for the journey along the M90 from his home, to the Peter Vardy garage in Kickaldy, which takes around half an hour.

He continued: “It was all pretty strange. I still can’t get over the driving I was doing, the speed I was going at.

“The cat was absolutely terrified. I felt horrible about what happened.”

The mechanics had opened the bonnet of the car as part of a standard check, he said.

“They were trying to stroke it but it bit one of them through his gloves.

“A receptionist came and gave it cat food. They put it in a box but it leapt back on to the engine.”

The cat, which is around eight years old, was stray and was quite underweight when found.

Mr Crookston said: “It’s one unlucky cat. The SSPCA said it would only have had a week left.

A spokeswoman for the garage said: “A technician opened up the bonnet to start the service and there the cat was.

“It looked very scared and its tail was all burnt.

“We gave the cat some water and one of the girls here went out and got food, the cat was obviously starving.”

She added: “We then phoned the RSPCA who took her away to make sure she was fine.

“There was no damage done to the car.”

Animal Rescue Officer Robert Ward took the cat to a vet for examination before transferring her to the Scottish SPCA’s Edinburgh and Lothians Animal Rescue and Rehoming Centre, where she has been named Maisie.

ARO Ward said, “Maisie is very lucky to be alive, particularly as the driver of the car would have been travelling at speeds of up to 70 miles per hour on the motorway.

“Remarkably Maisie only has two small burn injuries, one under her tail and another on her chin, which suggests she may have been lying on top of the hot engine during the journey, but otherwise she is unharmed.

“It’s quite common for cats to climb up into car engine areas for warmth and in fact only last week we rescued a cat that had travelled six miles under the bonnet of a car in Edinburgh.

“We think Maisie may have been straying for a few weeks before being found as she is quite underweight but she’s also a friendly, good natured girl so there may be someone, somewhere, who is missing her.

“The vet thinks she’s at least eight years old and she was found wearing quite a distinctive sparkly silver collar but unfortunately she had no identity tag or microchip.

“If someone is looking for Maisie then we’d love them to get in touch, but if no-one comes forward to claim her then we will find her a loving new home.”