FORTH Road Bridge bosses have banned an artist from creating a Remembrance Day tribute to soldiers killed in conflict – claiming it could encourage people to commit suicide.

Scots artist Brian Carey, 51, from Ayrshire, had hoped to place a series of small crosses, each one representing a serviceman or woman killed in Iraq or Afghanistan, on the iconic bridge.

He has successfully created similar shrines on bridges across the country, including Glasgow, Fort William and Lochaber. 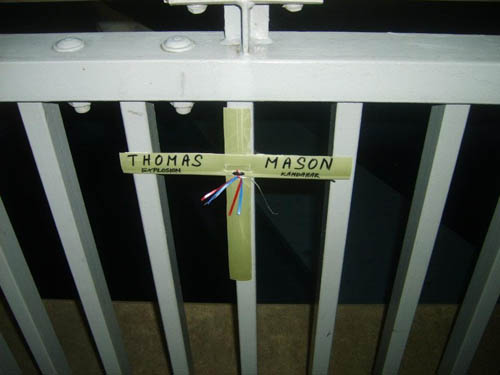 The memorial would be similar to one used that appeared in Glasgow.

But Forth planning officials vetoed his request for the memorial because it could be mistaken as a tribute to people who had killed themselves by leaping from the bridge.

They argued that could encourage more people to use the bridge to end their lives.

A similar tribute at Glasgow’s Squinty Bridge has been well-received by the public and has more than 400 crosses on it.

Mr Carey said he wanted to create the Forth Road Bridge tribute because of the high numbers of people who are enlisted in Fife.

The family of Black Watch corporal Thomas “Tam” Mason, from Rosyth, who was killed in October 2009 from injuries sustained in a roadside bombing in Afghanistan, slated the decision.

The family have added a cross to the Glasgow tribute, and Tam’s sister, Kelly Mason also put a poem on the shrine, which has left some passers by in floods of tears.

Tam’s mum, Linda Buchanan, said: “Brian has a close connection to us since Kelly put up the poem on the cross.

“He felt he could do this tribute for us in Fife. I feel saddened that something so simple, which someone he was prepared to create, which would have meant so much to us, won’t be going ahead.

“Brian had his plans drawn up and had hoped to have the tribute in place in time for Remembrance Sunday. He was very disappointed and annoyed by the decision. I can’t see why there are tributes on bridges across Scotland but not here in Fife where Tam lived.”

Tam’s sister Kelly, 26, added: “The artwork consisted of small crosses being placed in remembrance of all the fallen Afghanistan. Since this Brian has been in touch with the Forth Road Bridge asking for permission to so the same there and has been refused.

“The reason for the refusal was that it is a well-known place to commit suicide and they do not want to inadvertently advertise this.

“Brian has done this at many places across the country, but would have loved to do it on the Forth Road Bridge as Fife has such a high intake for the military.

“Brian was hoping to put a cross up for every military personnel who gave their life in Afghanistan and Iraq if he was allowed to do so and it would have been a wonderful tribute to all our heroes.” 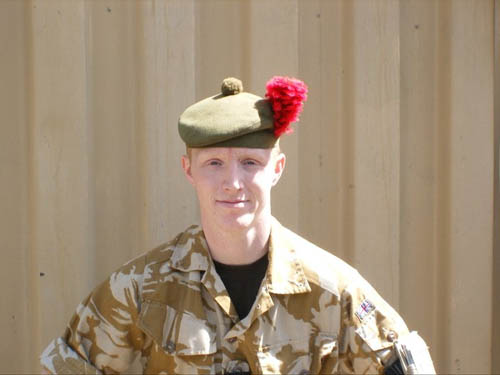 In a letter to artist, Councillor Tony Martin, convener of Forth Estuary Transport Authority, said: “I have discussed the matter with senior officials at the bridge authority and while we have full sympathy with what you are trying to achieve, with regret I am unable to give permission.

“The bridge by-laws prohibit the display of any banner or message on the atructyre but the main reason we cannot agree to your request is that the Forth Road Bridge, like all major bridges, is well known as a location for committing suicide.

“Many of the millions who use the bridge would inevitable assume that the crosses were linked to this issue and there is strong and established evidence that publicising suicides  can actually put the idea into vulnerable people’s heads and cause them to commit suicide themselves.

“I’m sure you can understand why it is therefore a priority for us to avoid high-lighting the issue, even inadvertently. We are regularly asked by members of the public for permission to place tributes on the bridge to friends and relatives who have committed suicide and we have consistently turned down these requests for the same reason.”

In August a similar tribute by Brian Carey in Fort William was taken down after someone complained about it to police.

The artist had placed 50 small crosses, each representing a serviceman or woman killed in the conflict, on a footbridge.

But when he returned to the River Nevis footbridge two days later, he found to his shock that every one he had placed there had been removed. He later discovered someone had complained to the police that they had found the memorial offensive.