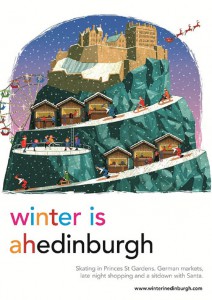 The city has already been widely mocked for its “incrediburgh” slogan, part of the “winterinedinburgh” campaign.

But a  video released to promote the campaign – featuring cartoon characters and a Scottish rapper – has been widely mocked on Twitter.

Rap outfit Stanley Odd invites Scots to “window shop round the clock in the A-toZinburgh” in the 32 second video, coming out with pun after pun like “breakfastinbedinburgh” and “wellfedinburgh”.

The video also features cartoon lobsters shopping on in the New Town area and the Walter Scott monument blasting off like a rocket.

The council defended the advert and the campaign, saying they look forward to assessing the success of the campaign.

But many viewers took to Twitter to express their disbelief.

Ryan Kelly Tweeted: “Advert for Edinburgh with the Scottish rapping is awful!!

Emma-Louise Fraser tweeted: “The Winter in Edinburgh advert is so tragic #embarrassing”.

“What the hell was that Edinburgh advert?! #Edinburgh,” wondered KittyAmitty.

And Natalie Waugh tweeted: “What on Earth is that winter in Edinburgh advert all about??!”

The video is part of a £300,000 campaign by arms-length company Marketing Edinburgh, which proved highly controversial after details of councillors’ unhappiness with the project were leaked to the media.

The furore led to the suspension of respected advertising guru Gerry Farrell  of The Leith Agency, who were brought in by Marketing Edinburgh to help with the campaign.

The council’s deputy leader Steve Cardownie, an outspoken critic of the campaign, became involved with a well-publicised spat with Mr Farrell over the issue.

Mr Farrell was suspended by the Leith Agency after branding Cllr Cardownie “Hissing Steve” on Twitter, but is now back at work.

Lead rapper Solareye, also known as David Hook, 33, said the Stanley Odd collective was proud of their involvement in the campaign.

The group were approached by Rage Music on behalf of The Leith Agency to lend their voices to the advert.

He said: “There’s a difference between advertising the place you live and and advertising, say, a can of deodorant.

“We took it as a great compliment that we were asked to be involved.

“And being paid to do a job helps finance other projects.”

The rappers were given the strict remit of including plays on the phrase “incredinburgh” in the track.

Solareye, who has lived in Edinbrugh for 12 years, continued: “There were certain things that we had to mention or allude to, which is pretty difficult to do in a 30-second advert.

“People are always going to have strong opinions about the way where they live is represented, but the response we have had to the advert has been very good.

“There is an extended version which will be put out soon.”

“We look forward to assessing the success of the new Winter campaign to help us to do this.”