A RETIRED engineer has become the first Scot to “visit” the International Space Station, travelling at 17,000mph some 250 miles above earth – and all without leaving home.

Space enthusiast Ian Sheffield couldn’t afford the £15m fare for a ride on the space station so he did the next best thing: persuade a cosmonaut to take a picture of him along for the ride.

Ian, 66, gave a snap of himself to Gennady Padalka who was only too happy to take the picture into space. 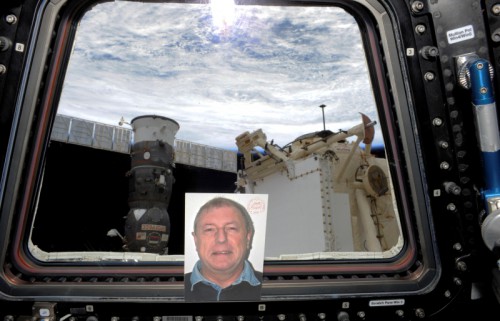 “Ian” spent the next 125 days whizzing around the earth, clocking up a total of 56 million miles.

Genady placed the picture in one of the windows of the space station, photographed it, and beamed the image back to a delighted “real” Ian back on earth.

Ian, from Haddington, East Lothian, has dreamed since he was a boy of travelling into space.

But as the space travel dreams of the 60s and 70s faded, Ian was forced to accept that he would never realise his ambition.

Ian, who now works part-time at the Royal Observatory visitor centre in Edinburgh, recently had a brain-wave.

He said:  “I’ve been interested in space ever since I was about 10 or so. I couldn’t afford the £15 million fare to go myself, so I thought, why not send a substitute?

“The best way of identifying something with me was to send my actual photograph.”

He said a friend of Gennady had helped arrange the picture’s journey, after Ian paid a small fee for the privilege.

“I know people connected with the cosmonaut Gennady, and I arranged for the photograph to be taken up and taken back down.”

Ian received the ISS picture last week, and was bowled over to see the beautiful image.

He said: “My first reaction was ‘Wow!’ It’s so out of the ordinary.”

The Soyuz spacecraft Gennady used to travel back to Earth can be seen in the background, against the vacuum of space.

The original six by four inch self-portrait began its journey in humble Gullane Post Office more than a year ago.

He said: “Last October was when I posted it to Germany and in December it went to Russia, and then earlier this year it was launched on the Soyuz spacecraft expedition 31 to the ISS.

“The lady behind the counter was slightly bemused when I casually mentioned that it would probably be the longest distance letter that she would ever handle.

Ian’s wife, Marjorie, was just as amazed to see the photograph, and he says his three grown-up children are equally delighted to have a space-faring father.

Ian has previously worked on software for the European Space Agency’s IRSO infra-red telescope, which studied the cosmos from orbit for over a year 15 years ago.

The International Space Station (ISS) is mankind’s only permanent bastion in space still in orbit.

Its first component was put in orbit in 1998, and since then space agencies around the world have been labouring to add different sections to it.

It can hold a crew of six, and is home to many different experiments.

Colonel Padalka has been aboard the ISS and Russia’s now-defunct Mir space station. The 54-year-old cosmonaut has completed nine spacewalks and a total of 710 days in space.

Ian Sheffield is the proud but controversial owner of two samples of moon dust brought back by the Apollo missions.

NASA sent Ian strongly-worded letter when he suggested showing off the grains of moon dust he bought from a German dealer.

Ian says he has two samples of moon dust, one from Neil Armstrong’s Apollo 11 mission and the other from Apollo 15.

Though the space agency says all samples are the property of the US government but moon dust is privately owned.

The space enthusiast first bought the Apollo 11 sample from a German dealer four years ago, and the other sample three years later.

Just a few millimetres across, the two samples are kept in a locked safe in Ian’s home.

Neil Armstrong inadvertently brought back the moon dust when he dropped a camera magazine in the Sea of Tranquility, covering it in the fine dust.

The magazine was then picked up by NASA photo technician Terry Slezak, who was subsequently considered contaminated and had to join the Apollo crew in quarantine.

They gave Slezak photos held together by sticky tape covered in moon dust from the magazine, and he sold this to a German dealer for £14,000.

The dealer then cut the original sample down into 50 smaller units, including the one held by Mr Sheffield, each valued at more than £2,000.

Ian will not disclose the sum he paid for the samples, but says he is “determined” not to give them up to the American authorities.

He said: “It’s the Apollo 11 one Nasa don’t like. The man who sold it on says he was given it, but NASA says he took it.”

Ian suggested showing off the samples at a talk three years ago, but then he ran this by NASA he received a stern letter from the space agency.

He said: “They got straight back, saying all moon samples are the property of the US government.

“NASA know I have both samples, but they’re very circumspect if you offer if for display.”

Last year, NASA recovered a sample of moon dust before it was to be sold at auction.