SHELVES at one of Scotland’s biggest supermarkets were left empty this week after spectacular computer blunder.

Red-faced bosses at the giant Asda store in Edinburgh were forced to apologise after dismayed shoppers turned up on Tuesday to find rows of bare shelves.

Frustrated customers compared the retail experience inside the store with Communist-era Russia. 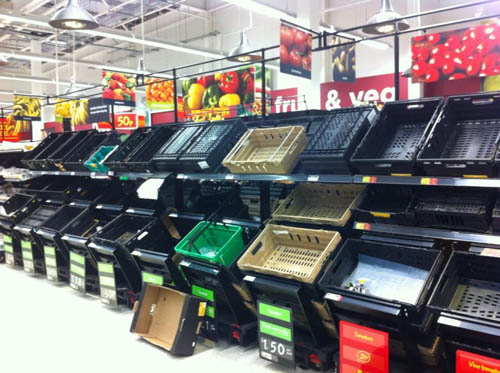 One shopper tweeted a picture of some empty shelves.

The chain is owned by US-based retail giants Wal-Mart and it is understood a worker in the States accidentally “deleted” the store from a delivery computer.

Regular shopper Patricia Meldrum went to pick up some groceries on Tuesday night and was left “astounded” by what she saw.

She said: “My partner was in earlier this week and he said the shelves were empty. I did not pay much attention until I went and was astounded. It was like shopping in Russia during the 80s.

“There was no fruit and veg and hardly anything in the fresh or frozen sections and a general lack of stuff in the store.”

She added: “I asked one of the assistants what was going on and was told that someone in America pressed a button and deleted the whole store from their systems, which I think is hilarious.”

Store bosses immediately ordered a restock after the mishap was uncovered, but empty shelves were still noticeable the following day.

It is understood the restocking mishap occurred after the employee wiped the store from its internal systems, meaning that essential reorders were never processed.

Regular store user, Gareth Scott, 29, from Clermiston said: “It’s a bit ridiculous isn’t it, You’d have thought they’d notice before the shelves were bare. The least you’d expect from a supermarket of this size is fresh fruit and veg and bread and milk.”

Another shopper Pauline Leggatt, 48, from Muirhouse, said: “It just goes to show with computers, one wrong flick of a switch somewhere in America and we end up with empty shelves here in Edinburgh.”

Lesley Beck posted a picture of an entire row of empty shelves and added: “Asda Chesser. You’d have thought they’d have noticed the issue with their re-stocking system before it got also

An Asda spokesman said: “There was a system glitch at head office which affected our Edinburgh Chesser store. This is the only store to be affected by this issue and it has now been resolved.

“The glitch meant that the store wasn’t able to restock the shelves as it normally would. As soon as we were made aware of what had happened, we took control of the orders to make sure the store was fully stocked with all the essentials. We are sorry for any inconvenience caused to our customers because of this system glitch.”