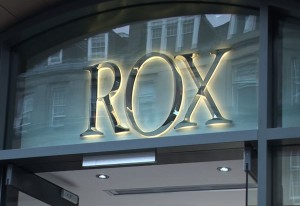 ARMED robbers have pulled off Scotland’s biggest-ever jewellery heist after getting away with diamond necklaces, rings and designer watches worth £1m from an upmarket jeweller’s.

Two raiders struck at Rox in Edinburgh which opened just four months ago in a glitzy event attended by TV personality Cat Cubie and rapper Labrinth.

The robbers – one armed with a gun and the other with an axe – smashed display cabinets before seizing items worth up to £100,000 each.

It is believed the team may have been after a £500,000 watch made by Swiss firm Girard-Perregaux – which was not in stock at the time.

The two female staff on duty at the time were left terrified but no shots were fired and no-one was hurt.

If the store’s estimate of £1m is confirmed, the Rox robbery will be highest-value robbery in Scottish criminal history. A 1974 bank robbery in Glasgow netted £87,000, worth around £830,000 in today’s money.

Neil Hamilton-Smith, lecturer in criminology at Stirling University, said he was not aware of any higher value theft in Scotland in recent times.

The raiders walked in to the luxurious George Street store at around 5.15pm on Tuesday.

The man with the axe smashed up the store, leaving such chaos that it took Rox a day even to estimate the value of the missing items.

The other robber, wielding what appeared to be a dark-coloured handgun, grabbed one of the assistants and forced her to open a window display. The stolen jewellery was placed in a rucksack.

A spokeswoman for Rox said: “Initial estimates suggest that £1m worth of stock has been taken including diamond necklaces and engagements rings worth upwards of £100,000 each and luxury watches from brands including Hublot and Corum.

“Girard-Perregaux watches were also taken during the raid, however, the rare Opera 2 timepiece worth £500,000 has not been in the store since Christmas.

“Staff are badly shaken but thankfully no-one was hurt.”

The robbers fled the shop and escaped on a motorbike which was found abandoned about 600 metres away in Northumberland Street Lane.

Detective Chief Inspector Bobby Deas of Lothian and Borders Police said: “This was a terrifying ordeal for the shop staff to endure, although, thankfully, neither was injured as a result.

“We are conducting various lines of enquiry to trace these items and identify those responsible for their theft.

“The motorcycle, which was used during the suspects’ getaway, is believed to have made a lot of noise as it sped off and members of the public who were nearby would have heard it.

“We would now urge anyone who remembers seeing or hearing the bike, or who recognises the description of the riders to contact police immediately.

“Similarly, anyone with any other information that can assist with our enquiries is also asked to come forward.”

DCI Deas added:”We are not sure if the gun was real but there were no shots fired.

“We are also unsure of what kind of axe it was – suffice to say it caused a lot damage and caused fear and alarm.”

The officer confirmed that they still did not know exactly what had been stolen.

“We are pursuing all lines of enquiry and have not ruled anything out,” he said.

“We’ve been speaking to the staff who have been tremendous help and provided us with useful information to follow up.”

A police insider said specialist officers would now work on trying to trace the items as attempts were made to sell them on.

“Items can be moved in a variety of ways and we are following all leads,” said the source.

An eyewitness to the raid, who was visiting Edinburgh on business, said: “I was outside the Assembly Rooms and I saw two guys running out of the shop, jump on a motorbike and speed off.

“They had masks on and I could see one was carrying an axe.

“Then two other guys approached me and said, ‘call the police – there’s an armed robbery going on.”

At present, police have extremely limited descriptions of the raiders.

One of the robbers was wearing a red helmet and the other a white helmet during the motorcycle getaway, which took place on a black Honda 650.

The man who wielded the axe is described as wearing dark coloured top and jogging bottoms with a stripe down the sleeve and leg.

Rox’s luxurious interior boasts a VIP Laurent-Perrier Champagne bar, with gold chandeliers and velvet couches, and every item is kept in a secure display case.

In December, the store proudly announced it was stocking the Girard-Perregaux Opera Two watch, worth £500,000, leading to speculation it may have been the target.

The jewellery chain’s blog said: “The rare one of a kind time piece from luxury Swiss watch brand Girard-Perregaux, worth £500,000, would take pride of place in any watch enthusiast’s collection.”

It said the watch featured 37 jewels, an ivory dial, a dark brown alligator strap, along with an 18 carat pink gold case.

Jewellery worth about £430,000 was stolen during a break-in at an auction house in Glasgow in January 2012.

In September last year, a robber stole £27,000 of diamond rings in a daring raid at Lime Blue, which is just 100 yards away from Rox.

Police have declined to comment on any links to Tuesday’s crime, saying only they are keeping an open mind.

Two years later he broke his own record by getting away with £87,000 from a bank in Whiteinch, Glasgow.

Two masked men escaped with the money after attacking guards outside the bank.

Professor Richard Sparks, Professor of Criminology at the University of Edinburgh said the Rox robbery was a “daring act”.

“It is unusual certainly, it’s an unusually high amount of money and because of the sheer means they would have had to take to protect themselves. In recent years armed robbery is not as widespread as it used to be.

“It was certainly a very daring act.”

Prof Sparks said he believed the robbery would be studied by criminologists in the future.

He added: “There is a school of thought about the decline of armed robberies.

“There is something almost old-fashioned about them. In the past, in many prisons, armed robbers were a high prestige group, thought of as people that were particularly capable – brave and intelligent, who used many resources.

“That is not really the main imagine people have of organised crime today, now the image is mostly associated with drugs smuggling.

“I think this robbery is very interesting, and shows someone with a high level of organisation.”

The Rox store is due to reopen tomorrow.

Police say they are conducting high-visibility patrols around Northumberland Street and are reassuring residents and businesses in the area.