THE Royal Botanic Garden in Edinburgh is celebrating after earning a listing in the prestigious Good Food Guide.

Just two years after the Queen opened a new £15.7 million visitor centre, the John Hope Gateway, its signature restaurant, the Gateway Restaurant, earned a listing in the respected food bible.

The accolade is doubly satisfying for the team behind the Gateway Restaurant because the restaurant and venue are managed by award-winning Sodexo Prestige and venues run by major contract caterers are normally excluded from the guide. 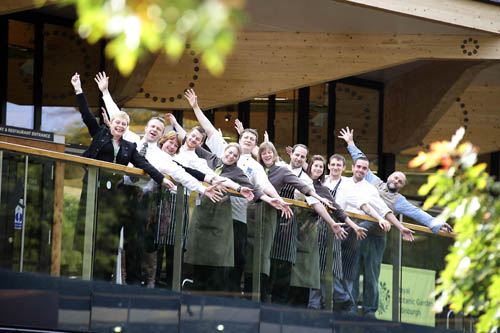 Paul Mitchell, Sodexo Prestige catering services director at RBGE, explains how the restaurant offers a unique service with the focus on seasonal Scottish produce and culinary heritage, and an inventive menu which includes produce from the garden.

Paul said: “The Good Food Guide is renowned as an impartial and trustworthy guide to the best restaurants in the UK and any venue worth its salt wants to be included.

“Sodexo Prestige is a nationwide contract caterer and our partnership with RBGE, like any other, is entirely bespoke and tailored to our customer’s requirements. Our head chef Ben Harrison creates his menu to ensure it offers local, sustainable and in-season produce.

“I’m delighted that The Good Food Guide and its readers appreciated our passion for food and food heritage, and now that we’ve actually been included in the guide, everyone here is understandably delighted.”

Fruit and vegetables grown in the garden are also used extensively in the menu, with diners enjoying fresh chillies and lemongrass in their Thai broth; fennel, cress, mustard, chard and rocket in their salads; and apples and pears in home-made sauces and chutneys.

The restaurant’s commitment to local, sustainable and in-season produce also sees it offer Ayrshire bacon for breakfast, a wide range of Scottish cheeses and locally-landed fish.

Elizabeth Carter, Consultant Editor of The Good Food Guide, said: ‘The Gateway Restaurant is that rare thing – a good restaurant catering mainly for tourists via a hard-working kitchen that puts quality and seasonality first.

“Well done Sodexo for having the vision to put in place a talented head chef and give him the freedom to do his own thing. If only more visitor-led venues could be like this.

“I would love to see more places like the Gateway Restaurant in the guide – it’s a perfect example of our Also Recommended category.”

As well as catering for daily visitors, the Sodexo Prestige team handle around 90 wedding parties each year, as well as dozens of conferences, corporate events and other functions. RBGE is one of 17 top class venues where Sodexo Prestige operates in Scotland and over 50 across the UK.

Thanks to ongoing success at venues including Hampden Stadium, National Museums of Scotland, Perth and Hamilton Park Racecourses, Blair Castle and Aberdeen Football Club, Sodexo Prestige in Scotland saw a record year for its conferencing and banqueting business with sales up 45% in 2012.

Moment top botanist ends up on bottom caught on camera