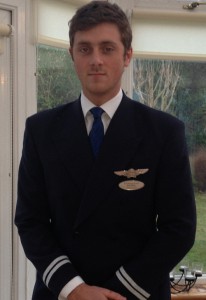 Martin Russell dreamed of becoming a pilot after watching jets fly out of Edinburgh Airport as a youngster.

And after training for three years, the high-flyer has landed a job with a major airline and regularly navigates a Boeing 737 through the skies with more than 200 people onboard.

Despite his success, Martin, who lives in Barnton, Edinburgh, said his school friends still refuse to board planes he is flying.

He said flying has been a lifelong dream.

He said: “I’d always wanted to fly; I don’t know whether living by Edinburgh Airport made me want to do it as it’s not in the family at all.

“Luckily it turned out I was quite good at it and it’s privilege to do a job like this and obviously a lost of responsibility.

“It’s a massive challenge for me, but the captains I work with have a huge amount of experience and that brings you on a great deal as a pilot.

“I don’t think age is important, so long as you meet the stringent standards they set out for you.”

Martin began training at the Oxford Aviation Academy in January 2010, where he studies theory ranging from electrics to the principles of flight.

He spent six months in Phoenix, Arizona, completing his basic flight training in near-perfect flying conditions before returning to England to finish the 18-month course in crowded skies above London.

Gaining his pilot licence, which can cost up to £100,000, also saw him complete six months on-the-job training with Thomson Airways.

He flew from Gatwick to Alicante on his 21st birthday.

As a first officer, Martin is second on command to captains on medium-haul flights from London to destinations including southern Spain, Greek Islands, North Africa and the Canaries.

Martin said: “It is really exciting and great to work for such a major airline.

“The busiest parts are leaving the airports and the arrival phase, which is the most rewarding and exciting part when it all goes to plan.

“I haven’t flown anyone I know yet. A lot of my friends joke and ask which plane I’m, flying then say they wouldn’t get on it.

“But I don’t think age should be a barrier and hopefully I prove that.”

John Murphy, director of flight operations at Thomson Airways, said he was pleased to have Martin on board.

He said: “We are thrilled for Martin, it’s a fantastic achievement for someone so young.

“We’re really pleased that Thomson Airways is able to train up young talent and we look forward to welcoming the next generation of pilots.”