THE owner of a Mercedes which became an internet sensation when it was marooned in the middle of car park resurfacing work was allowed to drive away without any penalties, it emerged today.

The unnamed driver will face no action from Network Rail, which owns Edinburgh’s Waverley Station car park, or transport police.

The S-class owner had apparently moved barriers in order to park in the spot, and on Friday workmen decided to simply work around the black saloon. 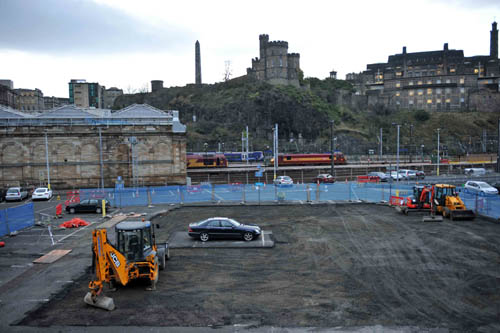 Network Rail’s resurfacing work was part of a £100 million refurbishment programme for the station.

As well as making headlines across the country, the story and pictures of the car spread like wildfire online, with ‘Waverley’ trending on Twitter in Edinburgh at one point on Friday.

Network Rail initially said barriers had been put up on Thursday to prepare for engineering work on Friday.

But the driver apparently removed the barriers and parked in the spot anyway on Thursday evening.

Network Rail to leave the car be as a gesture of good faith, but as Friday wore on they opted to continue work around it in order to meet their tight schedule, leaving a ramp in case the owner returned to remove it.

And on Saturday, after pictures of the bizarre scene spread on social media, the driver seems to have returned to pick up his vehicle, an S320 CDI worth up to £60,000.

A Network Rail spokesman said today: “The driver came back and took it away. It was removed on Saturday morning.”

He said no action would be taken against the owner for delaying the work: “Work is progressing as planned, it’s done as far as we are aware.”

A British Transport Police spokesman said: “It’s a matter for Network Rail. We are aware of the situation and will assist where we can. We understand it was parked legally.”

Network Rail had earlier pointed out they were entitled to claim any losses back for delays to work and inconvenience to customers.

ScotRail roasted on Twitter for issuing huge fine against customer