A RETAIL park has beefed up security to stop doughnut-crazy shoppers getting run over as they cross the road.

The opening of the Krispy Kreme store on the outskirts of Edinburgh last week has seen motorists queuing for up to an hour to buy the sugary snacks.

Some customers are getting so fed up they are parking nearby and sprinting across a busy, three-lane road – ignoring a safer route by footpath. 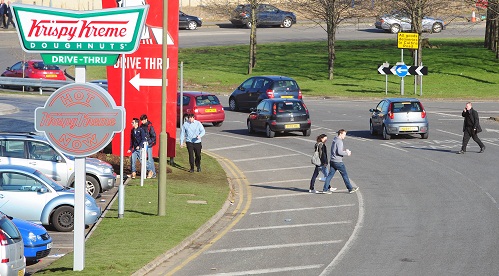 Bosses at the Hermiston Gait retail park, where the shop opened last Wednesday, have now employed extra security staff to work as traffic marshalls to prevent people walking across the road.

Mike Powell, park manager said: “It’s fair to say that the success of Krispy Kreme has exceeded all expectations.

“Traffic has been quite heavy, and at times the queue to the drive-in has tailed back. Some people have taken the option to park in the main retail park area and walk across the store.

“There is a dedicated foot-path with a crossing offering safe access from the retail park.

“However, occasionally some people have chosen to walk across the road, which offers a slightly shorter route as the crow flies, but is clearly not in the interests of safety.

“At peak times we have added extra security staff to act as traffic marshalls to deter people from doing so.”

Local SNP councillor, Catherine Fullerton, said: “Why would someone risk their own life, and the life of drivers, just to save a couple of minutes? I would hate to see any accidents happen and urge people to use common sense when visiting the store.”

The store opened last Wednesday (Feb 13) and has been inundated ever since with customers happy to pay £10 for a box of 12 doughnuts.

But the opening caused problems for other shops on the park and for transport bosses as the tailbacks reached the busy city bypass and M8.

Last week the traffic got so bad Lothian and Borders Police urged drivers to avoid the western side of the city altogether.

Some customers are even trekking from Glasgow to get their hands on Krispy Kreme doughnuts.

The store, which is the American chains first in Scotland, took a whopping £60,000 in its first day – three times as much as its previous UK record.

Last week, Tam Fry, for the National Obesity Forum, said the situation in “appalled” him.

He said: “I am actually speechless. If Edinburgh is overweight today then it will certainly be obese by tomorrow.

Judith Denby, chief marketing officer at Krispy Kreme UK said: “Obviously we are delighted with the unprecedented excitement around the opening of our first Scottish store, which coincided with the half-term holidays last week.

“The number of customer we served is way beyond out expectations for the peaks we usually see in the first few days of trading.

“We have made Edinburgh police aware of the traffic congestion caused by queuing for the car park and will continue to monitor it and advise customers on safe areas to park their cars.

In 1998 a 15-year-old boy was killed after running out on to the city bypass.

“Craig Meacock was struck down as he made his way from the Gogar area towards his home in Sighthill.
Craig, who was a pupil from Forrester High School in the city, died at the scene.