CLASSIC violinist superstar Nicola Benedetti has revealed she nearly missed out on her MBE – because she didn’t check her emails.

The top musician was awarded the MBE in the Queen’s New Year’s Honours list.

But the busy Scot, from West Kilbride, said the notification lay buried in a mountain of mail after she failed to check her account. 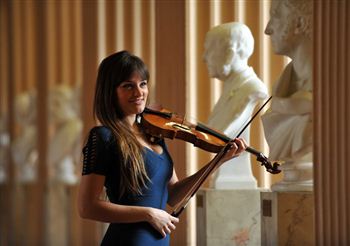 The 25-year-old said: “I’m never at home and only check my mail about once every three weeks.

“They have to get your submission to submit your name. Can you imagine if they’d cancelled it because I hadn’t got back to them?”

Benedetti, who lives in London with her cellist boyfriend Leonard Elschenbroich (corr), said she was thrilled to receive the honour.

She said: “I was excited, but a bit taken aback – you don’t expect something like that at 25.

“The first person I called was my mum.

“Like the rest of the family, she was proud.”

Despite living south of the border, Benedetti said Scotland was never far from her mind.

She said: “I can be very homely, and when I’m away it’s the scenery and the air, and the comfort of the straightforwardness of the people I miss.”

She will play in Greenock, Glasgow, Edinburgh, Perth, Aberdeen, and smaller places including Largs.

“That will be fun because we are an Italian family, we were never far away from Nardinis when I was a kid,” she said.

“Largs was the nearest place for a day out and I know it incredibly well, from going to the fair and walking along the seafront.”

Benedetti says she would consider a second appearance at T in the Park.

She added: “It was an experience and a half, something totally different.

“The only worry was I only play a really expensive Stradivarius so it would have been a real problem if the weather had been bad – it was a washout the previous day.”