IDLE Scottish prisoners are spending more than 90% of their time in jail doing nothing.

Inmates at some of Scotland’s busiest jails devote almost 22 hours a day to sitting about and playing games, it has been revealed.

Only around two hours of each day is spent doing “purposeful activities” such as working, studying or rehabilitation. 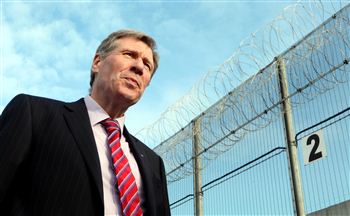 Politicians and victims’ families have hit out at the revelation, arguing that prisoners left idle are more likely to re-offend and could become more dangerous to the public.

The shocking situation was revealed by Labour’s justice spokesman Lewis MacDonald, who questioned prison chiefs on the number of hours prisoners are engaged in doing something productive.

In an official response, he was told that Saughton Prison in Edinburgh, which houses some of the country’s most deadly criminals, including triple murderer Peter Tobin, and schoolboy killer Imran Shahid, inmates do just 15 hours work a week.

The best performing prison was Low Moss, near BishopBriggs, where inmates were kept busy for 27 hours a week.

Peter Morris, a victims’ rights campaigner whose sister Claire was murdered by Malcolm Webster in 1994, said: “One of the consequences of not having purposeful activity is that re-offending goes through the roof.

“If people come out of prison without skills or anything to aim for, some feel the only option is to go back to crime.”

Mr MacDonald added: “These are low numbers. Even the best are only managing four or five hours a day.

“It’s concerning for young offenders in particular who should be a focus for training and education.”

There are currently around 8,000 prisoners in Scottish jails that cost the taxpayer around £32,000 each per year.

Official statistics show that more than two in five prisoners released from custody are back in prison within 12 months.

A spokesman for the Scottish Prison Service said: “We are reviewing purposeful activity and where we can increase it.

“We’re increased it fairly substantially at Low Moss and we’re looking at how we can do that for Polmont. We recognise we need to improve and are working towards that.”

Postcodes that produce the most female prisoners revealed

Scots cons get “mindfulness” training in bid to reduce violence