A COLLAPSE in rabbit colonies has helped speed up the decline of Scottish wildcats.

The wildcat has been starved to the brink of extinction because its main prey have been hit by the viral disease myxomatosis.

Oxford University scientists have said conservation zones must be set up to save the wildcat, one of Britain’s rarest species. 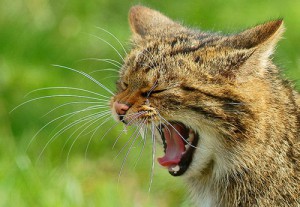 The number of wildcats living outside captivity could be as little as 35, and experts warned last year they could be extinct from their
natural habitats in months.

New research says the lack of rodents and rabbits has contributed to their decline in numbers.

A paper, published in the Diversity and Distributions journal, rubbishes the belief wildcats are purely a forest species.

It says: “Less mountainous areas with a diverse landscape including woodland and grassland supporting rabbits and a diversity of small rodents are a priority for wildcat conservation efforts.”

Wildcats are the only native wild feline to Britain, and are classed as a protected species.

Interbreeding with domestic and feral cats has hurt their numbers.

But a collapse in rabbit populations in areas such as Caithness, Sutherland and Lochaber have also hurt the wildcats’ chances of
survival.

Using data from wildcat surveys in 2006 to 2008, Oxford University researchers observed the animals were most likely to be found in large grassland areas.

It found no evidence that human disturbance was responsible for the decline in wildcat numbers.

Steve Piper, of the Scottish Wildcat Association, said: “This is the first scientific paper that confirms the importance of rabbits to the
survival of Scottish wildcats.

“This paper lays some important groundwork but it’s clearly an area that needs more study.”

Academics first suggested wildcat conservation areas in 2005, but purebred wildcats would need to be trapped and moved around the
country in order for them to work.

Island strongholds of wildcats could be set up under the plans to prevent further decline.

Mr Piper continued: “The concept of conservation zones came out of Oxford University in 2005 and it’s unfortunate they never got the
investment.

“If we’re going to protect the wildcat, we will need specific areas.”

“Grumpy Cat” could be a protected species

Genetic test could save Scottish wildcats from extinction