TARTAN has emerged as the most popular souvenir among international visitors to the world’s most remote gift shop.

Around one in ten visitors to Port Lockroy, on the Antarctic Peninsula, buys a Scottish-themed product, beating fridge magnets, T-shirts and bone china mugs to the top spot.

The world’s most southerly shop welcomes around 15,000 cruise ship passengers every year and sells souvenirs from cuddly toys, badges, books and crockery.

Despite being 11,000 miles from Scotland, the shop’s range of specially-designed ‘Antarctic Tartan’ is the runaway hit.

Tartan Day will be celebrated around the world in two weeks and the UK Antarctic Heritage Trust, the charity which runs the shop at Port Lockroy, said it was delighted with the international popularity of the Scottish range.

Rachel Morgan, director the trust, said the Antarctic tartan could be ”worn by anyone, regardless of Scottish clan lineage or nationality”.

She said: “Just like Antarctica itself – which is a continent belonging to the whole world – the Antarctic tartan is a universal design which can be ‘claimed’ and worn by anyone and has proved popular with the thousands of tourists who have already visited the shop this season.

“The tartan is a beautiful pattern reflecting the colours of the Antarctic landscape and all profits from sales go toward supporting our important work in preserving historic buildings in Antarctica and promoting knowledge of Antarctic heritage”.

The tartan, which was designed by Rosalind Jones in the Isle of Mull, is woven in Scotland from a combination of coloured threads representing different aspects of Antarctica’s natural history:

“The tartan has appealed to customers from all over the world as people seek inspiration for unusual presents to bring back from Antarctica” said Rachel.

“The fabric can also be purchased by the yard for anyone interested in having a kilt made up for Hogmanay or Burns Night”.

The second most popular item at the gift shop is the fridge magnet which sold around 1000.

Last year St Andrews graduate Florence Barrow was among four volunteers to go out to Port Lockroy to run the shop and monitor the behaviour of the 4,000 local penguins.

The 22-year-old beat 160 other applicants to bag the job and exploring is in her family’s blood.

Her great-great uncle was Hartley Ferrar, a geologist on Discovery, the ship used to explore the southern polar region between 1901 and 1904.

Discovery was purpose-built in Dundee, where she is now on display, for Captain Robert Falcon Scott’s first expedition to the Antarctic.

Florence’s great grandfather, John Gibson Anderson, from Aberdeen, was a deckhand with the Terra Nova expedition, which reached the South Pole in 1912. 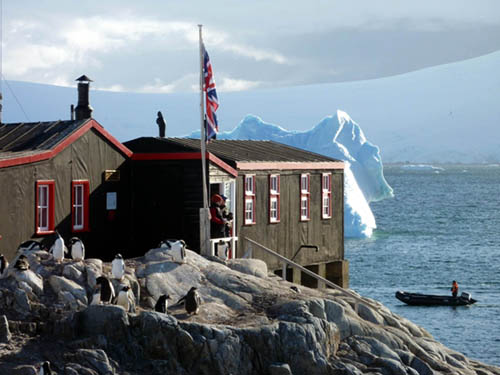