A WINDOW fitter fell to his death from a four-storey block of flats.

Paramedics rushed to Inverleith Row in Edinburgh early in the afternoon after 32-year-old Mark Paterson from Dalkeith, Midlothian plunged around 50ft from the top storey.

The victim, who fell into a garden area at the back of the tenement building, was pronounced dead at the scene. 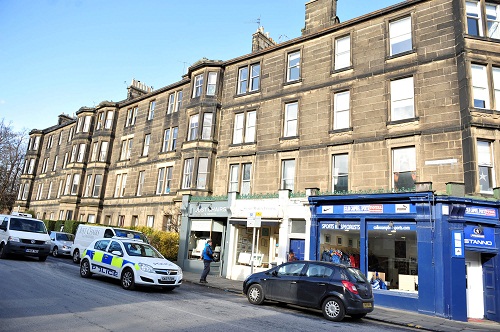 Shocked local residents said the man fell the full height of the building and that a loud bang was heard.

One passer-by said: “There was a group of people in fixing double-glazing to the flats.

“Then this guy – probably in his early thirties – falls from the top.

“It looks like it was a fatality judging by the reaction from the police and ambulance.

“I don’t know if he had his safety gear on.”

A picture-framer whose office is next to where the incident took place said: “I overheard the paramedics say he had no pulse.

“He was right up the top – that’s four stories.

“It’d be a miracle if he survived.”

Another homeowner said he heard a “bang” come from his back window.

He said: “I was watching films and my kids were in their bedroom.

“I heard a bang and thought they were just mucking about.

“Then the police said a man had died from falling – that must have been what I heard.”

A spokesman said: “Police in Edinburgh responded to an address in Inverleith Row at around 2.10pm on Tuesday 26th March after a man in his thirties was found injured in the street.

“The Scottish Ambulance Service were also in attendance and the man was pronounced dead at the scene.

“Enquiries are ongoing to determine the full circumstances surrounding this incident.”