DOZENS OF white flags branded with the word ‘Hello’ will greet visitors Edinburgh visitors this summer.

Edinburgh Art Festival organisers say the flags, which will fly above prominent buildings in the city, will allow people to “witness art outside of the gallery.”

They will be using contemporary British artist Peter Liversidge’s flag design in its 10th anniversary celebrations during August. 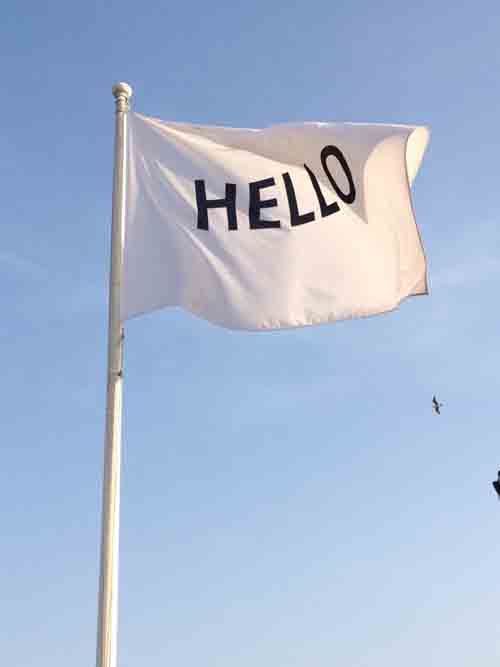 The ‘Hello’ flags, costing around £20 each, are being offered as a replacement to the of 80 Edinburgh-based companies in a bid to display a “collective welcome” for visitors to the city.

Mr Liversidge explained the flag is: “a simple welcome across the rooftops – a buoyant, floating ‘hello’”.

The National Museum of Scotland as well as Lloyds Bank have already confirmed they will be raising the flag above their rooftops.

This year the festival will revolve around a “Parley” theme and will exhibit work concerning conversation and collaboration across 30 venues in the capital.

Sorcha Carey, director the Edinburgh Art Festival, said: “[The flag] really fits in with the idea of ‘Parley’, it is a piece of direct communication and it is a way of trying to reclaim the flag as a means to communicate.”

Edinburgh’s population rises to over one million during the peak festival season in August.

Ms Carey added: “We all know August is when the city doubles in size, it becomes a different place, and this is a direct way saying hello.”

But though the city welcomes visitors from around the world, the flag will only welcome in English.

Ms Carey said: “’Hello’ is quite well understood in the world and I think for Peter, as an artist, is quite interested in how a simple greeting can mean so many things.

“I think it’s only in English because it’s our greeting to visitors,” she added.

The Edinburgh Art Festival is funded by Creative Scotland, Edinburgh Council, and the Scottish Government.

Ms Carey continued: “The flags cost around 20 to 30 euro each. We have a quote from a printer in Germany because Peter did his initial design there.

“We’ve not had them all printed yet as the unit price depends on the size of the poles the flags will be displayed on and how many companies want involved.”

The festival, which runs parallel to the Fringe and International Arts Festival from August to September, will also include major exhibitions from Gabriel Orozco, Gregor Schneider and Lawrence Weiner, Jeremy Deller and Franz West.