AN ELDERLY aunt who died after medics tore her throat during a routine procedure told relatives – “Look at what they did to me.”

Janet McGown visited the under-fire Victoria Hospital in Kirkcaldy, Fife earlier this year for an endoscopy.

But during the procedure the surgeon cut the 95-year-old’s oesophagus leaving her gasping and choking for breath. 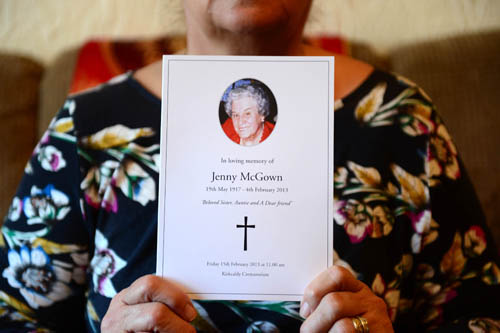 Hospital staff were against repairing the laceration and within six days it developed into a chest infection which led to her death.

The devastated family of Ms McGown said she should never of had to “die in agony”.

Ms McGown – a retired midwife from Kirkcaldy, Fife – suffered from arthritis and was partially sighted but enjoyed an active life.

Despite her age, Janet lived by herself at a sheltered housing complex, did her own weekly shop at Sainsburys and even did DIY jobs around her home.

Her niece Jane Russell, from Glenrothes in Fife, said: “She was an amazingly strong woman. My aunt had been by herself her whole life and was fiercely independent.

“Before the operation she was no weakling, she was partially sighted but that never kept her back. My husband had to tell her to slow down on her mobility scooter.”

But six months ago she began to feel sick – doctors found the cause of this to be bile duct stones.

In January she was scheduled for a “basket extraction endoscopy” at the Victoria Hospital in Kirkcaldy, Fife.

It is a routine procedure where a tube is placed down the patient’s throat in order for the stones to be removed.

Jane said: “She wanted to have the op finished with as quickly as possible so opted for a spray anaesthetic.”

However the following morning worried Jane received a phone call from the doctor.

She said: “He said it was okay – it was not bad news – but my aunt’s operation went wrong.

“On the way down the oesophagus the surgeon put a tear in her throat – they had to abandon the procedure because she began to choke.

“I went to see her that afternoon – she was on oxygen and gasping for breath.

“She had been told not to swallow because fluid would pass through the tear in her chest cavity.

“I spoke to the doctor who explained that an operation to sew the tear would be impossible.

“He said it was so far down that they would have to split my aunt’s ribcage to reach it and given her condition there would be no way she would survive the procedure.” 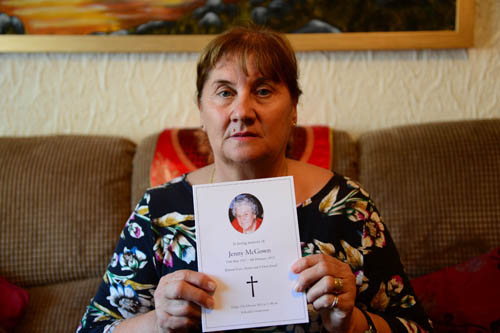 Jane said her aunt had been a “determined” and “independent” lady.

Victoria staff then asked a gasping Janet if she had always had throat problems.

Jane said: “She told him she certainly did not – I felt my blood start to boil at these questions.”

Doctors advised Ms Russell the tear in her aunt’s throat could heal but it would mean a three-week stay in hospital and she would involve tube-feeding and regular scans.

Janet McGown died on 4 February, less than a week after the endoscopy. Her death certificate states she died of a chest infection as a result of the wound.

Devastated Jane added: “That should never have been the way for her to die. She lasted six days in agony.

“She said to me ‘I wish I had just kept my sickness. I won’t be getting out of here – look at what they did to me.’”

She said her aunt could easily have lived to 100: “It’s unfair when people say she was already 95 and had a good life.

“She did have a good life buy she wasn’t ready to go yet. She had plans, she took holidays and she would have seen out 100 easily.”

Jane is now demanding answers from the health board: “”We don’t want to sue the hospital but we just want an explanation.

“Why were we not told that there would be more risks? If my aunt had been told everything then she never would have had the operation. She was doing fine.

“After her operation she knew how ill she was. She insisted on planning her own funeral and sorting out her house and will.

“She kept it from us, but she knew she was dying.

“If there were risks to such a simple procedure because of her age then why did the doctors go through with it? Why didn’t they explain everything to my aunt first?”

The Victoria has faced numerous complaints from patients since it opened its new wing last year.

In March last year, it was revealed more than 100 complaints had been received in the few months it had been open.

The latest scandal to hit Victoria Hospital was the allegations that it “hoodwinked” inspectors over its staff levels.

A 25-year-old Scots mum was forced to give birth on the frozen pavement outside the hospital in February last year after nurses failed to answer the door buzzer for several minutes.

Dr Brian Montgomery, medical director of NHS Fife, said: “I would like to offer my condolences to the family of Ms McGown.

“I can confirm that we are aware of this case and we encourage the family to contact our patient relations department to discuss their concerns further.”