A QUICK-thinking bus driver has been short-listed for a prestigious award after he came to the rescue of a couple trapped in a crashed car.

Steven Godfrey was driving First’s 68 service near Ancrum in the Scottish Borders when he came across a BMW X5 lying on its side, which seemed to have crashed into some trees by the rural road.

Stopping the bus to help, the 41-year-old quickly spotted the couple needed help fast, as smoke was pouring out the vehicle. 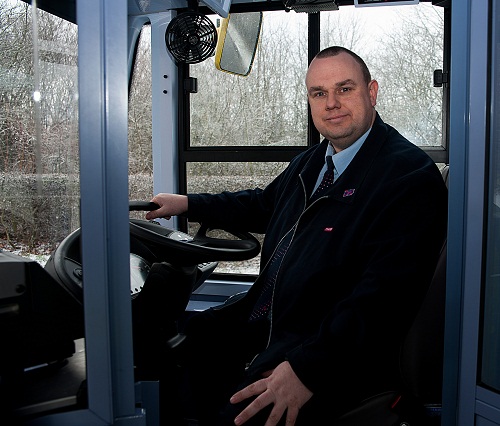 Worried the engine would go up in flames and fearful the car would topple over further, Steven then carefully helped the injured couple out through the boot.

Steven has been short-listed for the ‘Frontline  Employee  of  the Year Award’ at the Scottish Transport  Awards,  one  of  the  most  prominent  award  ceremonies in the transport industry.

The bus driver, from Bonchester Bridge near Hawick, has already been given the internal “Superstar” award by the First group, and bosses say he could have saved the couple’s lives.

The drama unfolded on 29 November last year, as Steven was driving the Jedburgh to Galashiels route.

He said: “The car was on its side and judging by how badly it was damaged, it had obviously been involved in a very nasty incident.”

“It did not appear as if any other vehicle was involved, but it was clear that they had collided with some trees on the side of the road.

“There was smoke emanating from the vehicle, so I knew the accident had happened just a couple of minutes beforehand.

“I parked the bus, and approached the car. The couple were trapped inside, but I was able to communicate with them.”

Steven said his safety training kicked in as he considered how to help the middle-aged couple.

He said: “As per my safety training at First Scotland East, I asked if the ignition was turned off, and then set about trying to get them free.

“I was very concerned that the engine would go up in flames and so I knew that getting them free safely and quickly was critical.”

Steven, a bus driver with First since 2009, said: “By now another motorist had stopped to provide help and suggested we try to pull them through the window, but I was really concerned this would upset the balance of the car and cause further injury.

“I decided it was much safer to gain access via the boot. So we quickly removed the headrests to create enough space so that we could set them free.

“We successfully got them out via the boot and I immediately escorted them on board the bus, all the time reassuring them that the emergency services were on their way, and that everything would be fine.

“It looked as if they had a few nasty cuts and bruises and were obviously in shock.”

Steven was handed the internal award, which comes with £100 of shopping vouchers, in January.

But the humble driver says he is just glad the couple are weren’t seriously hurt: “It was a miracle that they escaped from the wreckage without serious injury.

“I‘m  really  surprised to have been recognised – I did what anyone would have done.”

Operations  Director  for First Scotland East, John Gorman, said: “Steven’s quick thinking and heroic actions could have saved the couple’s lives.  I’m very proud of his actions and we hope he’ll win the award in June.”