Paisley-born Butler, 43, famed for testosterone-fuelled roles in 300 and Law Abiding Citizen, also described playing for the Glasgow team in a charity match last year as the “high point of my life.”

The actor, who splits his time living in America and the UK, said he was on business in Dubai when Celtic beat the legendary Barcelona 2-1 in their Champions League match in November last year. 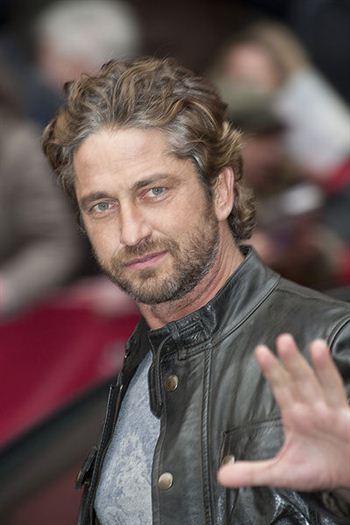 He said: “I was actually in Dubai, I was doing some work in Dubai and I was with all these big company dudes, we all went to dinner and I literally had them all leave.“The game was just incredible, I was in tears at the end, and I wasn’t the only one apparently – Rod Stewart – but at least I wasn’t filmed!”

Butler was in Glasgow in 2011 to play for Celtic Legends in a charity match against Manchester United Legends and said sharing a pitch with players such as Henrik Larsson and Neil Lennon was the best moment of his life.

“I have now done about 100 premiers but that was the high point of my life. My whole family came down and my friends were telling me it was the best game they had been to. Roy Keane was on the field, he made it look so easy!”.

Despite being a hard-core Celtic fan and regularly jetting from his LA home to watch his beloved team play, Butler admitted he had not always supported the top-of-the-league side.

He said: “I spent the first eight years of my life supporting St.Mirren who are the Paisley team, but then when I was about eight, I decided to get a life of my own and break away from my older brother. Then I starting supporting Celtic which I have to admit was a much more fun prospect.”

Butler said receiving a phone call from his cousin’s friend Kenny Dalglish when he was 13-years-old was his top childhood memory.

He said: “I grew up on a council estate and the fact that my cousin even knew him was a huge deal. I was sitting watching the television and my mum came running in. I thought it was a wind up, that was very bizarre but very cool of him to do that.”

During the interview, on talkSport radio yesterday (Thursday), Butler said he had enjoyed hanging out with David Beckham when he was playing for LA Galaxy.

He said: “I went to his last game, I hung out with David a few times, and he’s a great guy.”

He said he thought the former Manchester United player could have a future as a film actor. “I think he could, he looks more like a movie star!”

Butler also spoke of fellow Celtic fan Snoop Doggy Dog, saying: “I have a photo of him with a Celtic top on now!”

He ended the interview, shouting: “Come on you Celts!”

Born in Paisley in 1969, Butler spent some time in Canada as a youth and landed a small part in James Bond movie Tomorrow Never Dies before his breakthrough role in TV series Attila in 2001.

The actor divides his time between Los Angeles, New York and London and was voted one of Empire Magazine’s 100 sexiest stars in 2007.