TV hardmen Martin and Gary Kemp have admitted they are terrified of Glasgow’s “horrific” gang culture.

The brothers, who famously played notorious gangsters ‘The Krays’ onscreen, said they had “never come across anything like it before” after being confronted as they tried to film a documentary in Glasgow’s East End.

Older brother Gary, 53, said he found sectarian violence in the city “depressing”and that he was regularly hassled, alongside ex- Eastenders star Martin. 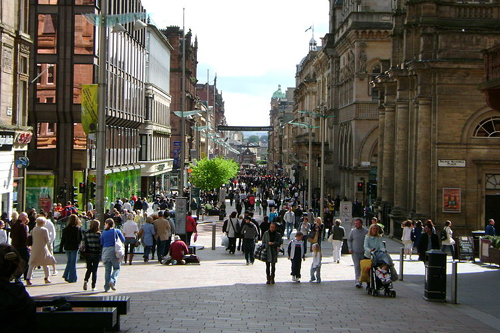 Gary Kemp said the violence in Glasgow was scary.

He said: “We got a lot of hassle and I’ll admit it was a bit scary,

“We were a tiny crew and we had no security with us.

“There were a lot of people coming up to us and telling us where to go“We’re quite recognisable, so it was a worry.”

Gary was filming documentary ‘Gangs of Britain With Gary & Martin Kemp’ for the Crimes & Investigation network.

He continued: “I know Glasgow really well and I have a lot of friends there. But I was always taken to the parts of the city that everyone is comfortable with and I’ve loved that side of Glasgow for years.

“This time I went to much tougher and harder areas.

“In most cities the driving force as to why kids form or join gangs is because they want to belong of perhaps just for financial gain.

“But in Glasgow it was different. The gang aspect was purely sectarian. I found that more depressing and its harder to challenge.

“Sectarianism doesn’t exist in the rest of the UK, apart from Northern Ireland.”

Former Eastenders star Martin, who was filming the documentary with his brother, said he found the hatred in the city to be “a life force of its own”.

The 51-year-old added: “I’ve never come across anything like it before

The documentary examines the history of gangs in Britain’s cities.

In the programme, Martin interviews Christine Goodall, an oral surgeon at the Southern General hospital, who regularly deals with victims of facial slashings.

She reveals one DIY weapon of choice for gangers – two razor blades of Stanley knife blades stuck to the back of a toothbrush. A gap is left between the blades so that only a small piece of skin remains between the cuts, making it harder to mend.

Gary said: “Martin told me the worst thing was the CCTV footage he was shown off camera that depicted terrible violence. He was really shocked.

“It was quite horrific when the surgeon at the Southern General told him about the pride people have in their scars.

“I don’t think that mentality will chance, unfortunately.

“We come from a working class background, the poorest area of Islington.

“We were never involved in that scene, but we knew people who were and just how easy it is to slip into that culture.”

Last year hardman actor Ross Kemp was condemned by Glasgow leaders for his “ridiculous” portrayal of the city as a third world warzone.

Kemp’s TV series compared Glasgow with cities in Pakistan, Mexico and Kenya which are plagued by organised drugs gangs, religiously-motivated terrorism, and people-trafficking.

He said: “These comparisons are clearly ridiculous. Its lazy journalism of the worst kind, is based entirely on outmoded stereotypes and sends out a dangerous message.”