GLASGOW’S Central Station will host weekly jazz concerts and dance performances in a bid to turn it into a “destination” station.

Managers at the station, the second-busiest in the UK outside London, hope the main concourse performances will see passengers will stay for longer before catching their trains.

Network Rail hope other stations will follow Glasgow’s example and set up their own live acts. 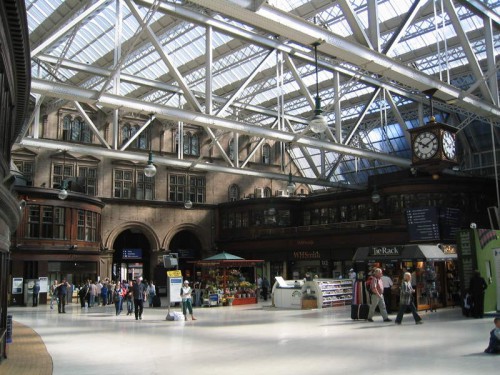 “We want as much music as possible, and as many events as we can. We want to draw people in and celebrate the station as a destination in its own right.”

Central station has already hosted a jazz band which played under its famous clock, and a group of 1950s dancers on Valentines Day.

It has also hosted Glasgow’s biggest Zumbathon, which saw more than 600 Zumba fans work out on the concourse.

Mr Moran said train stations made for a more “romantic” site than airports.

He said: “If you compare us to airports, the romance has evaporated from air travel nowadays – you get treated like a criminal and forced to take half your clothes off.

“But train stations are still ­romantic places, and they are particularly romantic places to meet. So we’d like to be able to cultivate that image.”

He added he was particularly keen to encourage jazz at the station in weekly “station sessions.”

Mr Moran continued: “I’d like the station to be recognised as a home of jazz – to have a weekly music session based at the station on a ­Friday night.

“What better way to go home for the weekend than to come to the station, have a couple of drinks and a bite to eat, listen to music and then jump on the train home?”

Lead singer Paul Towndrow said the scheme would go down well: “It works really well for the city because places like train stations and airports are usually the first time when a visitor to a city sets foot in the place, so the first impression they get is really important.

“If it’s one of culture, music and vibrancy then that translates into, hopefully, a really strong experience of the city.

“It’s good in terms of enriching visitors’ experience from a cultural point of view.”

He added musicians would get a boost from the exposure: “It’s the equivalent of a huge stadium-gig audience coming through at rush hour, so for us it’s great to be able to play our music for that number of ­people.”

A spokesman for Network Rail said: “On an ongoing basis we try to encourage people into the station – not just people who are travelling but those buying lunch or visiting a bar.

“It can be viewed as more than just a place to catch a train. Stations across the country do their own thing and put on different events.”

Glasgow Central will be a major transport hub for next year’s Commonwealth Games, and will hold a flashmob dance to celebrate Glasgow’s shorlisting for the 2018 youth Olympic Games.

Svend Brown, director of Glasgow Unesco City of Music, said: “This is a great initiative that will bring music to commuters and help fill this grand city building.

“Glasgow’s music scene is already incredibly vibrant with an average of 130 music events each week – more than any other Scottish city.

“This addition will bring joy to the travelling public.”