ARMED police are searching soldiers’ homes for an assault rifle which went missing from a secure armoury at a Scots barracks.

Civilian and Royal Military Police officers are  hunting for the powerful SA80 rifle, which went missing from Dreghorn Barracks in Edinburgh.

The weapon, which is fitted with optical sight, can fire 600 high-velocity bullets a minute. 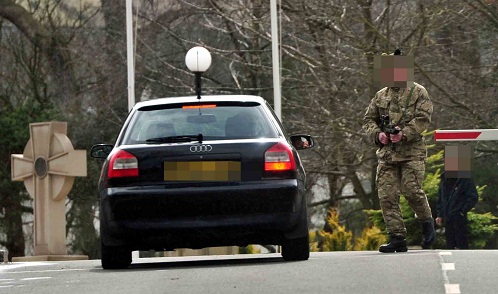 Soldiers from 1 Scots’ A, B  and C companies have been interviewed to try and find out where the weapon has gone.

The SA80 assault rifle has been commonly used by British soldiers on battlefields in Iraq and Afghanistan, and typically has a 30-round magazine.

Night vision scopes and army clothing have also gone missing, and an Army insider said the items were likely stolen to order.

A source at the backs said: “It’s really worrying, a weapon like that could obviously do a lot of damage.

“It doesn’t bear thinking about what someone wants it for, but they must have something planned.

“Whoever’s taken it, it’s clearly long gone now. It just proves how lapse security was before this happened.

“It has been crazy around here since, with extra checks on who’s going in and out.

“I’ve heard that there’s been armed raids on at least three homes and searches made of about ten others.”

The weapon was only discovered missing when soldiers, who had been preparing for homecoming parades, signed weapons back into the store.

A rifle which had never been signed out was unnacounted for, and the RMP and Police Scotland launched a joint search to find it.

Early versions were plagued with faults, but in 2000 the MoD carried out a £80million modification programme.

A former police officer said the weapon was “capable of great damage”.

He said: “This is high velocity weapon, capable of doing great damage, which is why the Army use it.

“Authorities will be very worried as it’s a lethal, high performance weapon.

“In the wrong hands, someone who had ammunition could do some real damage.”

Troops from 1Scots will march down Edinburgh’s Royal Mile on Saturday, before being given the Freedom of the City, with a similar parade being planned in Haddington, East Lothian.

The army spokeswoman said no ammunition was thought to have gone missing.

She said: “We can confirm that a weapon has been unnacounted for. The Special Investigations Branch investigation is ongoing.”

A Police Scotland spokesman said: “Police in Edinburgh assisted colleagues in the Royal Military Police at Dreghorn barracks on 11 April has part of an ongoing inquiry there.”