EDINBURGH was plunged into chaos today after a power cut brought hundreds of homes and businesses in the city to a standstill.

The blackout, caused by a fault at a sub-station, meant much of the north of the city was left powerless for up to 30 minutes.

Shoppers at department store John Lewis were trapped for around 20 minutes after staff refused to let them exit via the darkened corridors of a shopping centre. 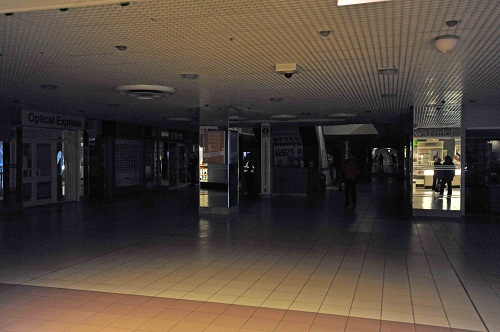 Busy road junctions were plunged into chaos after lights went out, and the famous clock at the Balmoral Hotel stopped for several minutes.

One shopper trapped in John Lewis said members of the public were furious at the reactions of staff members.

He said: “I was up at the St James shopping centre at the top of Leith Walk around 11.30am when the whole of John Lewis just went black.

“There was no panicking or anything but people started to get annoyed when doormen refused to let people out.

“They said it was a health and safety issue to have people wandering the dark corridors of the shopping centre.

“But one guy was having none of it – he nearly knocked a beauty worker to the floor just in order to get out.

“The fire brigade arrived in full gear and were checking pipes and things outside but I don’t think there was anything to worry about – I also noticed the clock on the Balmoral Hotel stopped working.”

A petrol station in Seafield – in the east of the city – had coffee continue to pour out of one of their dispensers following the power cut.

The manager – who did not wish to be named – said: “The power cut only lasted a matter of seconds – maybe a minute at the most – but it was enough to cause problems.

“Someone was using the coffee machine when it cut out but the coffee kept on coming – it was spilling all over the place and we just ran for a mop and bucket.”

One visitor said: “I was there for an hour and three quarters and the power didn’t completely go out – just flickering lights.”

Another added: “I didn’t even think anything of it. I just saw the lights flickering when I was in but that’s all.”

Twitter user “Gav Mc” said: “Power cut in Edinburgh … Maybe someone is turning off the lights on their way out?”

Lee Martin wrote: “People saying that the power cut in Edinburgh is down to Thatchers soul going into the power and becoming Skynet. I love twitter.”

NHS Lothian said they were not affected by the power cut that darkened the city.

Scottish Power said the power shortage was caused by fault at an electrical substation in East Lothian.

A spokeswoman said: “It’s difficult to determine how many were affected – there were customers across much of the city but a majority of queries came from the Leith area.

“The fault was attributed to a cable fault at the Smeaton Substation – it wasn’t a human error thing, unfortunately it was just one of those things where power cables experience faults.

“Despite the widespread effects we reacted quickly and had nearly everyone reconnected to a power supply within 15 minutes but it was possible there were pockets of the city that it perhaps took slightly longer.”

When asked if customers would be entitled to compensation as a result of any problems the spokeswoman replied: “No – compensations come under the guidelines of the regulator and it only relates to power shortages for long periods of time.”