DISNEY movie Brave has flopped on DVD because international audiences are struggling with its Scottish “quirks”.

Despite taking £364m at the box office last year, critics claim Brave lacks the “wider appeal” needed to make it a global hit. 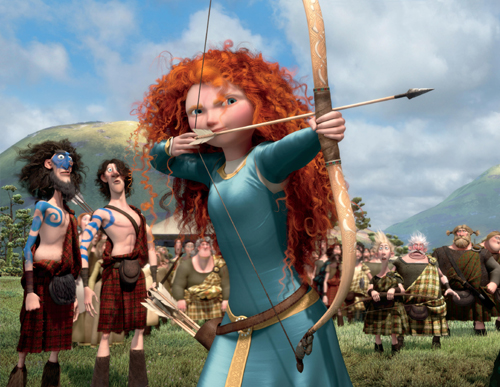 The lukewarm reception to the Brave DVD has been linked to US-based Disney’s decision to shed 150 jobs as part of a “streamlining” process.

The Disney-Pixar adventure, which cost £120m to make, features the voices of Trainspotting actress Kelly Macdonald and Glasgow funnyman Billy Connolly and tells of defiant Celtic princess Merida who battles to keep her kingdom from being torn apart.

Even one Scottish newspaper review admitted the movie contained “colloquialisms that may baffle” viewers. Brave features a running joke about a Doric speaker who cannot be understood even by other characters in the film.

Brave – which won Best Animated Film categories at the Oscars, Golden Globes and Baftas – has sold 6,249,834 DVDs since its release, generating more than £69m.

Disney chief executive and chairman Bob Iger acknowledged earlier this year that a decline in business was partly down to poor retail performances of Brave and a re-release of Cinderella.

He said: “Home entertainment results faced a difficult comparison given the releases of Cars 2 and The Lion King last year compared to Brave and Cinderella this year.”

Mark Andrews – one of the directors of Brave – confirmed earlier this month that viewers in the US didn’t understand the humour.

He said: “The greatest thing about showing Brave in Scotland was all the inside jokes we have in the film that only Scots would get.

“If you had a laughter track of Brave it would be laughing from beginning to end here while American audiences only got half of that.”

Mr Andrews also said he would like to try and work on a sequel.

He added: “If I get the right story, it would be fun to get the gang back together again, add a few more characters and find out what other Scottish characters out there are yet to be in a film.”

But film critic Siobhan Synnot suggested the film was too Scottish and that the local humour “limited global appeal”.

She said: “Brave resembles a Disney princess story; it’s beautifully animated, but doesn’t have the wider appeal of Pixar’s successful home retail releases such as the Toy Story series or Cars.

“Mark Andrews recently remarked that the film’s comedy played better in Scotland than anywhere else in the world, so I wonder if the Scottish cultural touchstones – the accents and the local quirks – limited the global appeal.

“But it was a courageous film that tried a lot of interesting things.”