TRIBUTES were paid to the “determined” Arctic convoy veteran who campaigned to get medals for his colleagues at his funeral yesterday.

Henry ‘Jock’ Dempster, 85, from Dunbar in East Lothian, died earlier this month after suffering a stroke.

Family and Mr Dempster’s former colleagues paid tribute to the campaigner, who was laid to rest in a coffin draped in the merchant navy flag.

At a ceremony in Dunbar Parish Church today (tue), more than 200 people attended to pay their respects to the sailor.

Many were wearing the white berets of Arctic convoy veterans, who braved freezing temperatures and U-boat attacks to deliver vital supplies in World War II.

After a service by Rev Gordon Stevenson, the coffin, draped in the merchant navy flag and red roses, was led out of the church.

The coffin was led out of the hall by five standard bearers as a piper played, carrying the Arctic convoy standard, the merchant navy standard and standards for the British Legion.

Mourners were told of Mr Dempster’s love of the sea, which spanned from childhood when he and a friend were rescued by the coastguard after rowing across Montrose Basin in a metal bath tub, using sticks as oars.

The veteran was also described as “determined” and “very sociable,” and as a man who liked to exchange stories over a couple of beers – his stories often considered as the “biggest and best.”

Rev Gordon Stevenson also took time to mention the “white beret” which Jock so often wore, and would proudly sponsor when leading the annual parade to the Cenetaph in London on Armistice Day.

Mr Dempster visited 10 Downing Street in March to receive his Arctic Star medal, which was presented by the Prime Minister.

At a reception on board the HMS Belfast after the awards, Rev Stevenson said the veteran joked with Mr Cameron, saying “the Tories would never see you starving, they just shut their eyes.”

Tribute was also paid to the Arctic Convoy veteran by the Russian Consul General in Edinburgh, Sergei Krustikov (corr).

Neil Pickles, a former RAF Colleague and friend of 47 years said: “Jock and all who served were finally euphoric when the Government announced the award of the Arctic Star.

“Jock’s service to his country was massive. His friendship was of the same calibre.

“His devotion to his family and his beloved Maggie  was from his heart. Like all he did , he gave 101%  all who knew Jock, will miss him. I am privileged to call him friend.”

Mourners said the service was a celebration of his life, and friends spoke of their pride in seeing the seaman receive the medal he had campaigned for.

Donald Skinner, 80, who was in the merchant navy in the 1950s, said: “One of the great things about jock is that he kept pushing for the Arctic stars for all these years.

“One of the highlights of our year last year was seeing Jock getting his medal on TV from the Prime Minister.”

“Anybody whoever met him would tell you he was a laugh and was always wearing his kilt and white beret.”

“He was just one of these men who you were pleased to have known. He was a charmer too, a very charming man with a great sense of humour.”

David Craig, 88, was a merchant navy officer on the Arctic convoys at 18.

He said: “He put on a lot of work to get us the recognition and medals, but he was a worrier, he worried quite a lot but he didn’t have anything to worry about.

“The arctic convoy association disbanded last year because we are all too old to want to work anymore, no one can remember what happened last week anymore, but we will always remember what we saw on the convoys.

“We will miss Jock, he was the centre and kept us all together.”

David Fisher, 78, a friend from the Merchant Navy Association in Dunbar, said: “Jock was active and enthusiastic in his pursuits. He was forthright and modest about his achievements – he’d just say ‘I just do what I can do, when I can do it’.”

Bill Gibson, 74, who served in the navy for 28 years said: “Jock was a nice chap, and a beautiful man. He was politically minded – he’d say whatever he felt.”

Peter Harrison, 75, worked with jock in trying to get a museum built about the convoys at Loch Ewe.

He said: “I worked with jock for 20 years. We started to raise money for the museum and jock managed to get a substantial donation from Russia which has enabled us to get this far and keep working.

“We have a promise to the veterans including jock to make the museum happen.”

A note on flowers left at the church said: “Remembering Uncle Harry from all family in Montrose, Laurencekirk and Australia.” 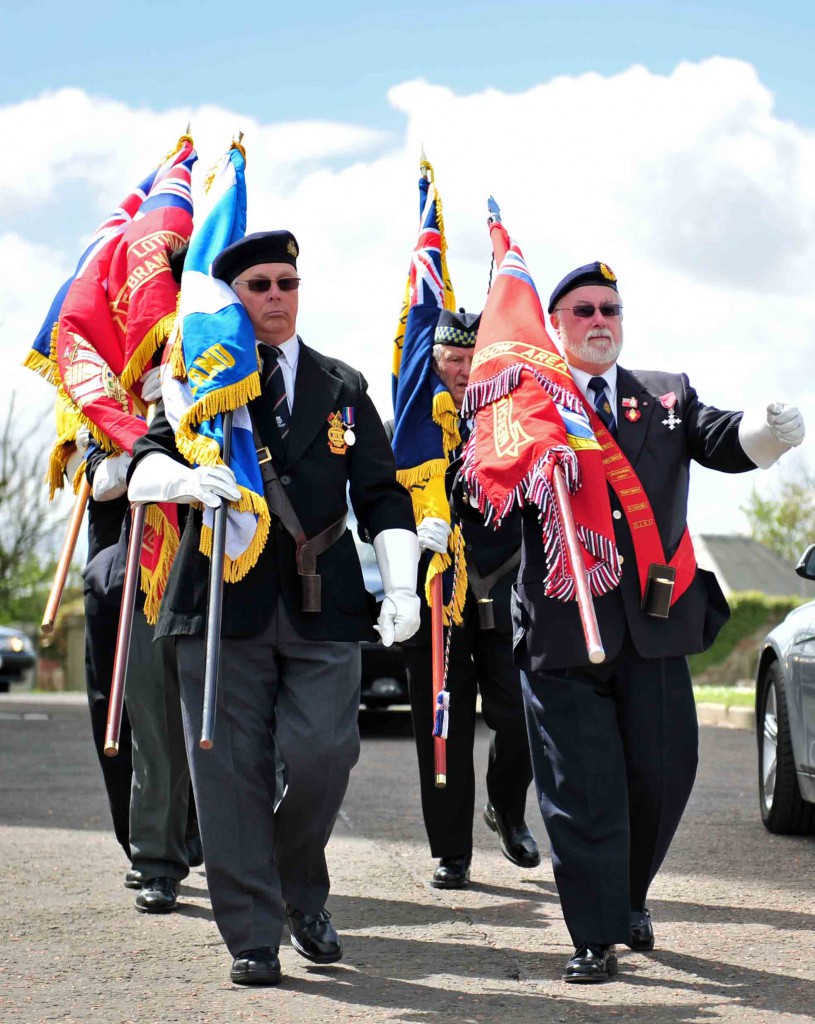