A CURRY-EATING competition to raise cash for sick children has been banned by health bosses in case contestants get hurt.

Organisers have been told to substitute poppadoms for eye-watering curry – or the hospital charity will pull out of the event. 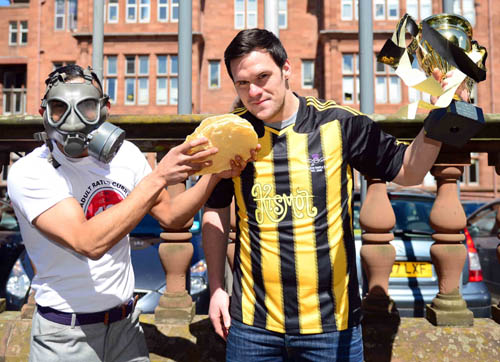 But the Sick Kids Friends Foundation refused to have anything to do with the competition because of the curry’s reputation for putting people in hospital.

In 2011, two contestants in a competition to eat the Killer needed hospital treatment, including student Curie Kim who was taken to casualty by ambulance.

Around 20 Thistle players planned to eat bowls of the incendiary curry against the clock.

The curry is packed with Ghost and Jolokia peppers, which are among the hottest in the world.

But the Sick Kids Friends Foundation have said they will only back the event if the challenge is toned down to munching poppadoms. 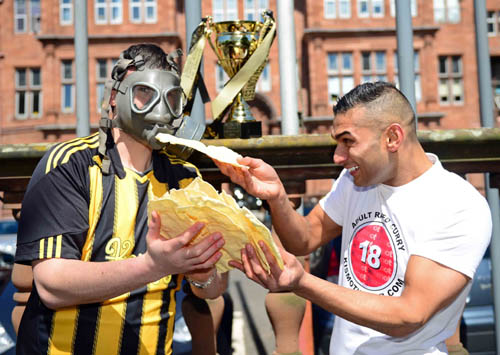 Abdul Ali, chef at the Kismot, who sponsor the club.

Tuesday’s event, which should have crowned the club’s “Curry King” has been renamed “Pop a poppadom for the Sick Kids”.

Falcon Thistle manager James Millar said: “We’re disappointed – we all like a good eat and the team were all for trying it.

“We’re going to have to tell people it’s not for eating curry anymore, it’s for poppadoms.”

Abdul Ali, chef at the Kismot in Edinburgh, said: “The footballers are very, very upset, they were up for doing a Killer challenge – they were hoping to challenge each other.

“They had been training all week for it, they have been eating chillis for breakfast.”

A spokeswoman for the Sick Kids Friends Foundation said: “Safety is always our prime concern when organising or supporting fundraising events.

“We have decided to err on the side of caution and we are delighted that Kismot has found an alternative way to support us.

“We are appreciative to everyone who has pledged to take part.” 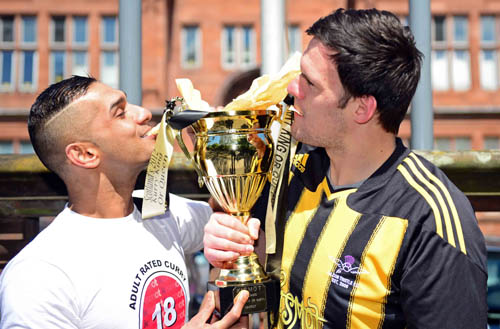 The two men try out the poppadoms.

Last year’s Kismot Killer competition passed off uneventfully after doctors were brought in to monitor the health of those taking part.

The title was won by 23-year-old Paul Jeffrey.