STAFF at a tiny Scottish hotel were left stunned after a party of wealthy Americans booking a stay for The Open golf championship asked if they had a helipad.

Management at the Goblin Ha’ Hotel in Gifford, East Lothian – population 700 – had to politely explain that the village did not have helicopter facilities.

Despite failing to meet their request for bespoke aviation, the industrialists booked a nine-night stay at £90 per person per night. 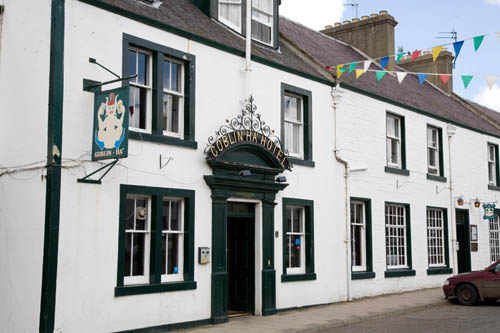 Instead, they plan to get to the golf at Muirfield, 14 miles away, by chauffeur-driven limo at a cost that could be as high as £300 a day.

Rob Reeley, owner of the Goblin Ha’, said: “We got the call from the secretariat of what was described as an elite members club in the US saying they had tried to get accommodation within 30 miles of Muirfield for two of its members.

“They said they realised they have left things too late, so they were delighted when we said we could accommodate them.

“We were completing the booking details and checking on any other requirements, when the caller then asked: Do you have a helipad?

“We had to hold back a laugh and politely explain that helipads are not a common sight in Gifford.

“We try to accommodate the weird and wonderful requirements of guests staying at our hotel but unfortunately on this rare occasion we could not meet their wishes.

“But we now know they have sorted out a limo for their stay so while they may not be flying around, they still will be arriving in some style.”

As one of the biggest sporting events in the UK in 2013, The Open will attract around 140,000 visitors from all over the world to East Lothian and should account for around 1% of Edinburgh and the Lothians income for the year.

Hiring a chauffeur-driven car for the four day event will cost visitors more than £1,000.

Scottish Labour councillor John McMillan, from Haddington and Lammermuir, said: “I haven’t heard of a request for a helipad before but last year at the open most of the Americans I spoke to had already booked their accommodation more than a year in advance, and one family were even staying for two months.

“The competition offers a huge boost to the economy, welcoming around 140,000 visitors and is a great opportunity to showcase East Lothian.

“The helipad request is a wonderful example of how much people care about the event, and how much effort they make to fully enjoy themselves.”

Gifford is named after an underground chamber in the nearby ruin of Yester Castle.

Yester Castle was built in 1267 for Sir Hugo Gifford, locally thought to be a wizard with a design that incorporated a dungeon know as the Goblin Hall, or Goblin Ha’, allegedly built with the aid of magic.