A SCOTS dad has spoken of his relief after a routine eye exam discovered a tumour which could have left him blind.

Thomas Vasvary, 47, was attending a routine two year check up at a Specsavers in Edinburgh when his optometrist noticed troubling irregularities in his peripheral vision.

Optometrist Ciara Nixon, 24, referred Mr Vasvary to specialists at the Princess Alexandra Eye Pavilion, where he was diagnosed with a tumour on his optic nerve that, if left untreated, could have seriously damaged his sight. 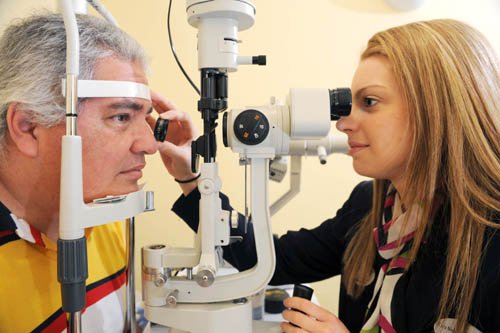 After responding well to radiotherapy treatment, Mr Vasvary, a cleaner at St George’s School for Girls who is originally from Brazil, spoke of his gratitude.

The father-of-one said: “I had no idea anything was wrong. I thought I might have to change my glasses but I thought everything was good.

“Then they asked me to go for a scan and it showed a tumour around my optic nerve.

“They said that if I hadn’t had the treatment, I probably would have lost my vision in about a year, maximum. But if it stopped growing I could have a normal life.

“I had the treatment for 40 days, and until now nothing has changed.
The doctors said they can’t say anything definitive, but that it’s good news.”

Ciara Nixon, the optometrist who first noticed the problems with Vasvary’s sight, said the incident was relatively rare.

It was one of only three of its kind in the last three years at the Leith branch of Specsavers.

She said: “Thomas came in routinely for an eye test; it was his two year check up. I did the eye test and everything looked nice and healthy and his vision wasn’t affected.”

It was only during the visual field test that followed the routine checks that Nixon noticed the irregularities in Mr Vasvary’s sight, after which she promptly referred him.

She has since said of her actions: “It is satisfying to know I helped him. An eye test isn’t just about your vision; it’s about general health as well.”