TWO police cars were torched in the street as officers responded to a call.

At least one of the marked vehicles was engulfed in flames and destroyed following the attack in the Niddrie area of Edinburgh on Monday night.

Images posted online showed huge flames consuming one of the cars, which was left a burned-out wreck and had to be towed away. 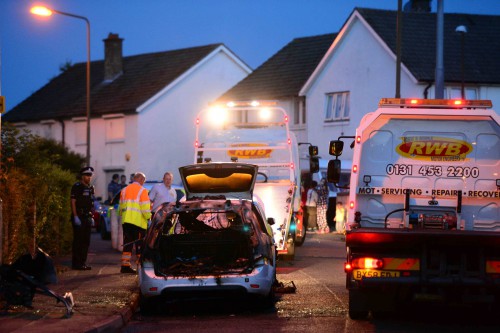 No officers were hurt in the incident and police are appealing for witnesses to come forward.

The fires are not thought to be related to the original call-out which was described as “genuine”.

A video posted online showed locals watching the blazing cars from behind a nearby wall as smoke billowed into the street.

One says in the video: “They two police dinnae ken what to do.”

Other residents spoke of their shock at the blaze.

Ross Glanville, from nearby Craigmillar, posted on Facebook: “It’s terrible and I bet the culprits are really pleased with themselves.

” The downside to the whole area is Niddrie House Park where the majority of housing is managed by the council who do nothing to benefit the area by means of booting the idiots out.”

Elaine Walker, from Edinburgh, posted on Twitter: “OMG!!! Why are they setting police cars on fire in niddrie???”

A Police Scotland spokesman said: “Police Scotland can confirm that two marked police vehicles that were responding to a call in Niddrie House Park sustained significant damage after being set alight on Monday evening.

“Two males were detained and have been released pending further enquiries.

“Anyone with information that can assist police with their investigation is asked to come forward immediately.”

A spokeswoman said: “Firefighters extinguished it with a high pressure hose.”