A YOUNG Scot enjoying a dream working holiday in Australia ended up in a coma – after getting an infected finger.

Sean Foster may have been bitten by an insect, causing an infection which spread through his arm and led to a rare nervous disease.

Doctors decided the best chance they had of saving the 20-year-old’s life was to put him in a medically-induced coma.

Sean, from Edinburgh, woke at the weekend and is now on a ventilator in a Darwin hospital.

He scraped together at least £5,000 for the dream trip with six friends, arriving in early June for the year-long working break. 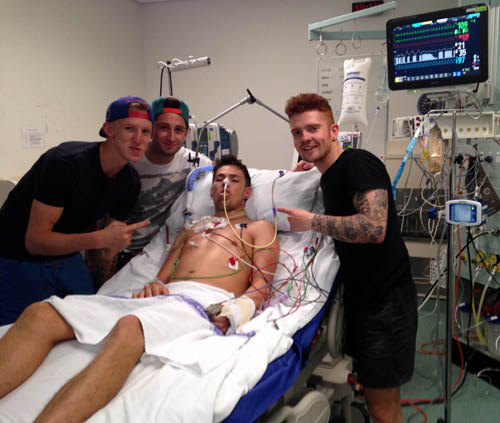 Sean, pictured above after waking up in hospital, had started feeling unwell on June 29 but was able to make his first job interview, for a stocktaker’s post, on July 1 in Darwin, Northern Territory.

He tweeted that day: “I feel dead as it is. Panicking. Need to get whatever it is sorted, be it a bite or a virus!”

The following day he was so weak he was physically unable to get to hospital.

His friend, Martyn Robinson, 21, said: “I had to carry him down the stairs and took him to hospital in a taxi.”

Doctors diagnosed Sean with a rare condition called Guillain-Barre Syndrome, which attacks the nervous system and affects around one in 100,000 people a year.

Medics put Sean in a coma so that his body could concentrate all its resources on battling back to health.

Martyn said that although Sean had woken up his is currently paralysed.

“He just lies on his bed not moving,” he said.

“It’s his whole body up to his neck, he can’t do anything.”

Sean’s dad Ian, 67, also from Edinburgh, said: “We spoke to him before he went into the coma and he said, ‘I miss you and I want to come home’. 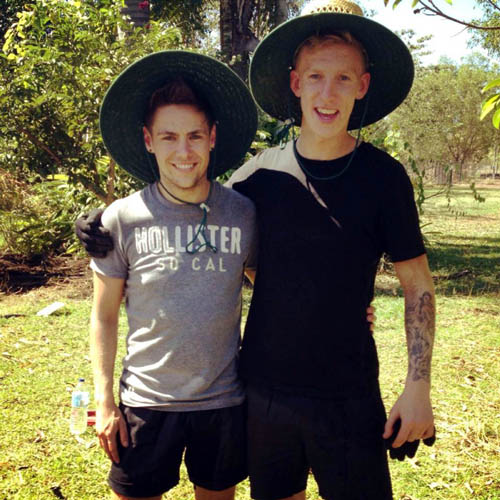 “It’s very worrying – we’re so far away and we feel so hopeless and useless.”

Now that Sean (above left) has woken up, doctors are hopeful he will make a full recovery but the process could take many weeks.

And because he is on a ventilator, Sean cannot even talk to his family at home.

Ian, who will fly to Darwin with his wife, June, 60, next week, said:  “They’re telling me he’s looking good.

“On good days the doctor is able to put the phone to his ear.”

Sean’s friends, who had dispersed around Australia to work, have gathered in Darwin to give him support.

Ian said: “The boys have been brilliant – it was their dream move, they’ve all got jobs over there.

“Now this had happened.

“It’s his birthday on Monday.”