A CANCER patient who was told she had five years to live managed to survive for 20 – long enough to see her sons grow up.

Sandra Buchanan, from Edinburgh, was diagnosed with terminal cancer in 1993 and told that she would be dead by 1998.

But brave Sandra finally lost her battle with cancer at the weekend – aged 57 and having lived for 15 years longer than medics predicted. 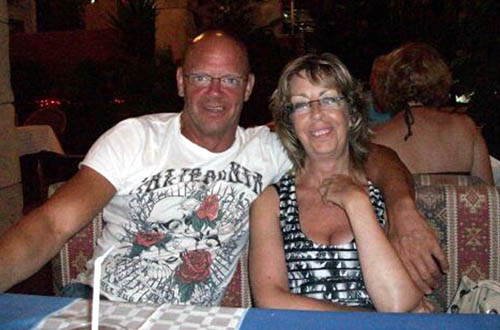 Since being diagnosed with Non-Hodgkin’s lymphoma when she was 37, Sandra put up a heroic fight and even travelled to the United States to undergo alternative treatment.

Sandra, whose has another son, Callum, 22, died at Edinburgh’s Western General Hospital on Sunday.

Jamie, a trainee chef, said:“I’ll always remember mum’s laughter. Even on the day before she died, she was still joking.

“Losing her has left a gap in our lives.

“The doctors told mum she had five years to live, but she treated the situation with a sense of ‘that’s not going to happen’. I think she just wanted to hang on to watch us grow up. She had grit and determination, she was always smiling and happy, even to the end.

“She was an incredibly strong person – no-one could tell her ‘no’.

“It means so much to us that we got this much time because there was a point at which we didn’t know how things were going to go.

Non- Hodgkin’s lymphoma is a cancer of the lymphatic system – a group of vessels and glands which are spread throughout the body.

The cause of the disease is still unknown, but is incurable for the vast majority of those diagnosed.

Having already undergone chemotherapy,  she flew to the Gerson Institute in California which claims its natural treatment which involves a special organic diet can help heal cancer among other diseases.

When Mrs Buchanan returned to Scotland she continued to follow a strict diet and had to give herself daily injections of liver extract and vitamin B12.

The diet also meant she had to consume up to 20lb of fruit and vegetables a day, much of which is turned into drinks.

The money for the treatment was raised through fundraising such as parties and raffles which were all organised by Mrs Buchanan.

Speaking at the time of her diagnosis, Mrs Buchanan said: “I want to live for my children. I don’t want them growing up without a mum like I did.

“My mum died when I was 15. I remember how upset I was and still am. The last thing I want is to put Jamie and Callum through that. They need their mum and I have to keep going for them.”

Despite her illness, Mrs Buchanan continued to work for the Royal Bank of Scotland in their fraud department until two years ago, when her condition worsened.

Mrs Buchanan’s husband, Willie said that while most people would have taken a “backseat” after the shocking diagnosis,  his wife refused to accept she was going to die.

The 57-year-old said:”It was a huge shock when she was diagnosed – you just don’t expect something like that to happen when you are only in your 30s.

“Most people take a backseat when something like that happen, but she said it wasn’t going to happen to her. After getting the second bout of chemotherapy she started looking at other types of therapy and I’m sure it helped extend her life.

“She would have liked to have had grandchildren, but she really just wanted to see the boys grow up and to make sure they looked after themselves.”