POLICE have launched a hate crime investigation after a transgender woman was barred from female toilets at a Scots shopping centre.

River Song, 18, who is waiting for sex swap surgery to complete the change from man to woman, was told by a security guard: “You are a male and always will be.”

River, from Edinburgh, made an immediate complaint to Police Scotland who confirmed yesterday (Thu) they had started a hate crime enquiry. 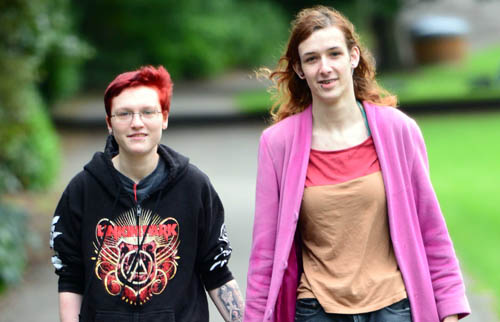 The incident happened at the St James Centre in central Edinburgh on Monday this week when River (above right with Jake)  used the female toilets.

River, who is engaged to a transgender man also awaiting sex swap surgery, said she had never been treated so badly or felt so humiliated.

River said she and her fiance, Jake Wood, 18, were shopping at the St James Centre on Monday afternoon when she used the female toilets – as she has done without problems for the past two years.

River said: “A security guard pulled me aside and asked me if I had had a sex change.

“I couldn’t quite believe what I was hearing but I answered him saying, ‘no’.

“He then asked me, ‘Why have you used the female bathrooms if you haven’t had a sex change?’

“He asked for my ID which I showed him and as he glanced at it he said, ‘This is a male, you are a male and always will be a male’.”

River said this reduced her to tears and she rejoined her fiance in the food court.

She added: “As we were walking down to service desk we noticed him following us.

River added: “He continued to make comments aimed towards me and one point he said ‘it’s got a penis’ which is so offensive.

“We get abuse on a daily basis but I have never in my life been treated so badly and felt so humiliated.”

James Morton, Scottish Transgender Alliance manager, said: “We are very concerned to hear another report of a security guard unlawfully harassing a trans woman while she was trying to use a female toilet.

“There is no requirement in UK law for a trans woman to undergo any surgery in order to be legally recognised as female.

“Verbally abusing a trans women by calling her “it” and demanding to know whether she has undergone genital surgery is unlawful harassment under the Equality Act 2010 and could even result in criminal charges against the security guard for threatening or abusive behaviour.”

A Police Scotland spokesman said: “Police in Edinburgh attended at a shopping centre in the city-centre on Monday 19th August following reports of offensive comments made by a security guard towards an individual within the complex.

“Enquiries are ongoing in relation to this incident.

“Police Scotland treat all reports of hate crime seriously and work alongside our partner agencies to provide a range of support, advice and guidance to anyone who believes they have been a victim of such an offence.”