A SCOTTISH restaurant says its version of a 400-calorie treat called the cronut is proving a big hit with sweet-toothed customers.

Customers have been queueing out of the door to get their hands on the £4.50 cross between a doughnut and a croissant.

The cronut was created in Manhattan and New Yorkers are reported to have stood in line for up to five hours to get their hands on one. 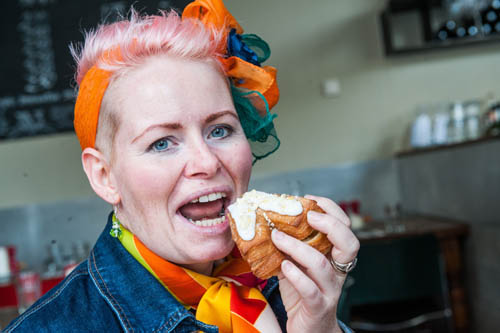 The Scottish version, being sold at a restaurant in Leith, Edinburgh, is V-shaped and called the V-nut to avoid copyright issues with the US creators.

Richard McLelland, the 36-year-old boss of restaurant The Vintage, said they planned to give Krispy Kreme a run for their money.

The US doughnut chain was revealed to have sold five million doughnuts in its first six months of business at its first Scottish store on the outskirts of the capital.

Mr McLelland claimed: “Krispy Kreme are the Bud Lite of the pastry world and we are the craft brewing side of it.

“This is our interpretation of the cronut and I’m not frightened of winding up Krispy Kreme about that because we are the artisan alternative to them.”

He added: “We put them on the menu for Sunday brunch and we had people queuing out the door for them. Every single person that came in asked for one over the Sunday roast.

“I wasn’t surprised by the interest because I had seen the evidence from the United States where there was a run on the product.

“There is such a foody culture now and when you have something new that people haven’t tried before everyone wants to have it.

“They want to be able to talk about it, saying they were one of the first to taste it.”

New Yorker’s were seen queuing for up to five hours just to taste one of the pastries, and the craze has now become so much that customers have been restricted to buying just two cronuts a day.

Mr Ansel recently applied for copyright of the term cronut.

However, nutritionist have warned that the 400-calorie treat is not something people should be eating everyday.

Roisin Cooke, nutritional therapist at the Edinburgh Centre of Nutrition and Therapy, said: “Of course, it’s all about having a balanced diet and people still need to enjoy these types of things but it really should be an absolute exception.

“There is lots of saturated fat, sugar, salt and it really isn’t something you should be eating everyday.”