SCOTLAND’S clan chiefs gathered to pay their respects to the soldiers who died at the Battle of Flodden – 500 years after their ancestors fought the English in the conflict.

Around 40 clan leaders from families across Scotland gathered in Edinburgh for a special service at the city’s St Giles’ cathedral today.

The charity service also saw Edinburgh’s historic ‘Blue Blanket’ unfurled – this was the city’s fighting banner which was brought back along with news of the “disastrous” defeat. 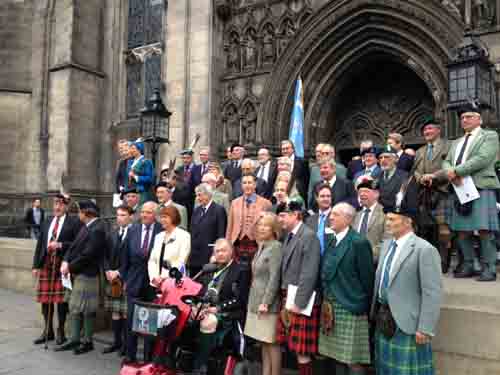 The Battle of Flodden, fought near Branxton in Northumberland on 9 September 1513, saw a Scottish army led by King James IV defeated by the English and 10,000 killed.

The king himself and much of the country’s nobility perished in the battle, and less than a century later Scotland and England would be joined in the Union of the Crowns.

Hundreds packed out the central Edinburgh cathedral for the service.

Field Marshall the Lord Guthrie of Craigbank, a former head of the Army whose ancestors fought at Flodden, read the first lesson from Ecclesiates.

The Blue Blanket, a replica of the original, was solemnly brought in to the service by Ian Robertson of the Convenery of the Trades of Edinburgh.

500 years ago Captain Randolph Murray of the city band returned from the battle with the blanket, which bears the names of Edinburgh’s prominent trades, bearing the news of the defeat.

Historian Alistair Moffat gave a vivid address to the service, describing the bloody battle and its aftermath.

He described the battle as “the greatest military disaster in Scotland’s history” which left the field strewn with “broken pikeshafts, shattered shields and the sickening stench of death.”

He said it was “the last medieval battle in British history and the last time a king would lead an army into battle.”

The historian described the king’s fatal error: “By leading from the front James was immediately submerged in the ruck of the fighting, in no position to direct his forces, and the result was a disaster.”

Singer Isla St Clair sang the Flowers of the Forest at the service – which mourns Scotland’s loss at the battle.

Many of the gathered clan leaders could trace their lineage back to Flodden.

Malcolm Sinclair, the Earl of Caithness and a hereditary peer, owes his family’s noble heritage to the events at Flodden.

In the 16th Century the Sinclair clan had been censured by James IV’s father, and were in danger of losing their noble title.

But he explained the family’s wrongs were forgiven when the chief of the clan contributed a force of 300 men to James IV’s army.

He said before the service: “He turned up at Flodden and King James was so pleased to see him he forgave all his wrongs.

“He wrote a pardon, but all that was available was the skin of a drumhead.

“He sent the drummer boy home [to Caithness] and he was the only one to go home.”

Sir Malcolm MacGregor of MacGregor, convener of the Standing Council of Scottish Chiefs, said the battle was a “disaster” for the Scottish army.

He said: “It was a catastrophe from the top down, but we’re here to remember the fallen and we’re using the 500 year anniversary to raise money for Combat Stress and Erskine.”

Sir Malcolm said the battle of Flodden often went unremembered in Scotland for two reasons: “The first is the battle site itself is in England

“The second is it was a defeat.

“People don’t want to remember defeats but this is the 500 year anniversary of a battle that in some ways brought Scotland and England together.”