DRAMATIC evidence of how native red squirrels are winning the war against grey invaders in Scotland has emerged in a new report.

Sightings of grey squirrels have declined by around 45% in key areas – while the reds are holding their own.

Two harsh winters in a row took a heavy toll on grey squirrels while the native species was able to withstand weeks of cold and snow. 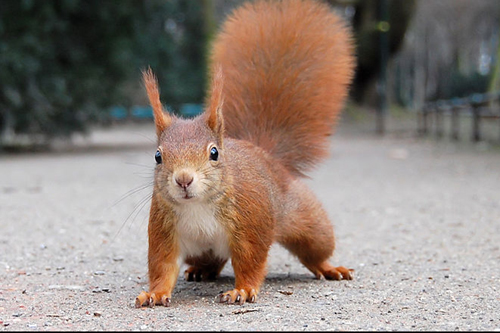 Extensive culling of greys has also had a significant effect on numbers, according to conservation project Saving Scotland’s red Squirrels.

The group studied sightings of squirrels at 95 feeder boxes set up on the “front line” between species in central and north east Scotland.

Red squirrels were spotted at 79.5% of the boxes.

Despite recent harsh winters, that is only a slight drop on the 84.9% recorded in 2012 and not seen by the conservation group as statistically significant.

The report raises hopes that red squirrels are finally on the verge of victory over the grey after decades of struggle.

Greys, which originate from North America, once threatened to wipe out reds by robbing them of their habitat and spreading the deadly squirrelpox virus.

“It’s certainly looking like the work we’re doing is making a difference.

“I think the story is positive. The red squirrel population has stabilised and greys are greatly reduced.”

The report warns there is no room to let up on greys.

“Sustained trapping effort may therefore prevent this species from rebounding, whilst allowing red squirrels to take advantage of any improvements in food availability by autumn 2013,” say the report authors.

Red squirrels are also thought to be making a firm comeback in south west Scotland – with the first confirmed sighting in 47 years in one town.

An elderly woman spotted a red squirrel in Annan, Dumfriesshire, for the first time in almost half a century in her back garden.

Sheila Iveson, 79, said: “[Me and my husband] have lived in this house for 47 years and have never seen a red squirrel in the garden before.”

Mrs Iveson’s husband, William, 82, was so surprised he took a picture