A SCOTS girl is suffering from a genetic condition which means she can’t eat pizza, has no 3D vision and had to be taught how to hop.

The bizarre condition affecting Keri MacNicol, six, is so rare, it hasn’t even been given a name.

It means the girl from Burntisland,Fife, has had to be taught how to do many of the things most children do instinctively. 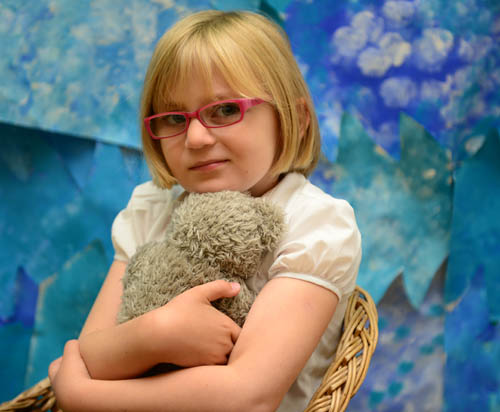 Keri is missing part of a chromosome which means her entire body lacks the muscle power that most of us take for granted.

The P2 pupil has so little muscle tone that even chewing food is difficult and she could choke on pizza or pasta.

Running, hopping and even stepping on to a pavement are so difficult and she has had to be taught these and other basic skills from scratch.

Her condition has not yet been named by medical science and is referred to by the name of the missing gene – 1p21.3p21.2 microdeletion.

Mother Gillian, 38, a technology manager and dad Neil, 40, a business analyst, noticed something was wrong with their daughter when she was a baby.

Gillian said: “During her six month check we realised that she wasn’t able to sit up right and I knew there was something wrong with my child.

“Before then we had issues, Keri was a breach birth and had hip dysplasia, meaning her hips did not form properly in the womb.

“I felt anxious because I knew something was wrong, and I needed answers.

“You scare yourself when you look online and I needed to know what her future would hold or not hold.

The family got the answers they were looking for just before Keri’s third birthday when she was referred to a geneticist –  It took two years to get a diagnosis due to the rarity of her condition.

“Keri is missing part of the chromosome that is significant to her development.

“The disorder means nothing nothing comes naturally to Keri and she has to learn and be taught the most basic of skills that other children are able to do without thinking,” Gillian added.

“We had to teach her how to eat, she can swallow naturally but chewing is difficult because she has a lack of muscle tone throughout her entire body.

“It means her muscles are weaker than other children and she struggles to hold things and move things because her muscles can’t support the weight.

“She can’t chew solid foods, she will never eat pizza.

“She only eats food that she can break down into little pieces such as cucumber.

“She was a vegetarian for a long time because fish is easier to eat than meat, she can’t chew on the meat.

“Convincing her to try new foods can take years. She has had experiences where she has gagged and almost choked on food.

“She once had pasta from a pasta-bake and choked on a piece so refuses to eat pasta now as she associates it with choking.”

Keri’s condition means that although she looks the same as her friends, she can’t walk, run or play like them.

Her disorder affects her spatial awareness and balance, making physical activities difficult and tires her easily.

“She’s unsteady on her feet, especially on stairs or on pavements where there is a curb.

“She had to be taught how to hop by one of her teachers at her highland dance class, I had to explain to them at the time that she isn’t able to do skills that are natural to other children.

“Because she has no 3D vision, her depth perception means her brain cannot work out how far away things are or how high a curb is for example.

“She can’t understand the speed of an oncoming car, and has difficulty walking up stairs so had quite a few accidents when she was younger.

“Now she simply avoids doing anything that might result in her getting hurt.”

The past few years have been challenging for the family but they believe that Keri will be able to do things like other children but it will take longer to learn and develop her skills.

Help and support for the family has come from Unique, a UK charity for those affected by rare chromosome disorders.

Unique is a Jeans for Genes grant charity and will receive £25,000 to help fund its conferences to educate people about chromosome disorders.