A THIEF agreed to return a £1000 stolen bike after being bombarded with texts from friends of the owner.
Roy Munro, 36, was devastated when his Scot Sub bike was stolen in Edinburgh.
But after spotting the machine on ads website Gumtree he came up with a cunning plan for getting it back. 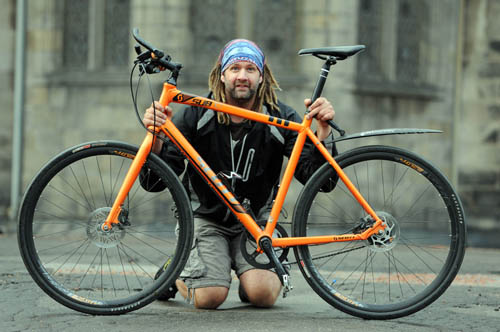 The thief had included his mobile number on the Gumtree ad which Roy, a school janitor, passed on to all his Facebook friends.
They started sending hundreds of texts to the thief which simply said: “Stolen bike.”
Within an hour of the text attack starting, the thief was pleading for mercy.
The criminal texted back one of his tormenters saying he was prepared to give the bike back.
Roy got a call at midnight the following day to say his precious bike had been left in the street.
He said:“To be honest, I’m surprised the plan worked at all. I suppose it was the fear factor – I made him think twice about what he was doing.
“There’s no point in burying your head in the sand.
“There are always ways you can get thing done yourself. There’s no guarantee they’ll come off but there’s no harm in trying.”
Roy and police in Edinburgh had tried to use the Gumtree lead in a sting operation but the thief failed to show.
A spokesman for Police Scotland said: “Police in Edinburgh are investigating after a bicycle was stolen from a stairwell in Spey Terrace sometime between 11pm on Monday, September 16 and 7am on Tuesday, September 17.”
Share
Facebook
Twitter
Pinterest
WhatsApp
Linkedin
Previous articleA cross-border skirmish has broken out over deep fried Mars Bars after an English firm applied for patent
Next articleScots 11-year-old lands role in TV drama Outlander