NEW evidence of the intelligence of elephants has been uncovered by Scottish researchers.

The creatures, the world’s biggest land animals, naturally understand what human beings mean when they point at something.

Although the point of pointing is obvious to us, no other animal is known to have this natural ability. 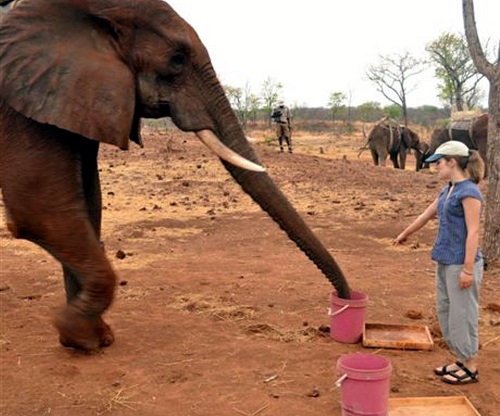 Staff at the University of St Andrews wanted to find out if elephants could be trained to follow pointing directions.

They were shocked to discover that the animals did not need to be trained.

When researchers pointed at a bucket they were amazed to find that the elephant responded on the very first attempt, securing the treat inside.

A herd of elephants at Victoria Falls in Zimbabwe were used for the experiment.

Researcher Anna Smet said: “We always hoped that our elephants – whose ‘day job’ is taking tourists for elephant-back rides near Victoria Falls – would be able to learn to follow human pointing.

“But what really surprised us is that they did not apparently need to learn anything.

“Their understanding was as good on the first trial as the last, and we could find no sign of learning over the experiment.”

Researchers placed two buckets next to each other but deliberately tried to trick to the animals by standing next to the unselected bucket, pointing at the other one.

Professor Richard Byrne, from the St Andrews’ school of psychology and neuroscience, said the findings prove that “elephants seem to understand us humans in a way most other animals don’t.”

He said: “When people want to direct the attention of others, they will naturally do so by pointing, starting from a very young age.

“Pointing is the most immediate and direct way that humans have for controlling others’ attention.

“Even our closest relatives, the great apes, typically fail to understand pointing when it’s done for them by human carers.

“In contrast, the domestic dog, adapted to working with humans over many thousands of years and sometimes selectively bred to follow pointing, is able to follow human pointing – a skill the dogs probably learn from repeated, one-to-one interactions with their owners.”

He added: “It has long been a puzzle that one animal, the elephant, doesn’t seem to need domestication in order to learn to work effectively with humans.

“They have a natural capacity to interact with humans even though – unlike horses, dogs and camels – they have never been bred or domesticated for that role.”

But this might not be the first time elephants have been involved in finger pointing.

Ms Smet added: “Elephants do regularly make prominent trunk gestures, for instance when one individual detects the scent of a dangerous predator, but it remains to be seen whether those motions act in elephant society as ‘points.’”

The five tonne beasts are known for their loyalty and have been seen mourning the death of a loved one.