A GARDENER had to be rushed to hospital after his leg was skewered by the 14-inch blades of a soil-churning machine.

Howard McQueen was using a rotavator – a powerful machine with spinning metal blades – to turn over soil at his home in Camptoun, East Lothian.

The 52-year-old’s leg was impaled by three of the machine’s 14-inch blades in the accident on Saturday morning, with part of the metal protruding from the other side. 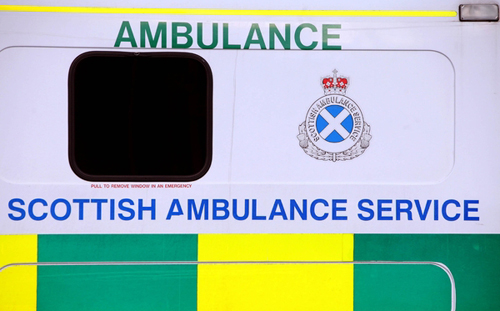 Mr McQueen had to be taken to hospital with part of the rotavator still stuck inside his leg.

Medic One – an ambulance with a doctor on board – was sent to the scene as well as firefighters.

Group Commander Colin Bruce, who was in charge of the operation, described the painstaking efforts to free Mr McQueen from the machine.

He said: “Ambulance and police were in attendance and had started to stabilise the casualty, who had become impaled on a large garden rotavator.

“It became a long, drawn-out process because we had to be careful how we removed the blades.”

He said around three of the blades, which were 12 to 14 inches long, were stuck in the man’s leg.

It took around an hour and a half to free the casualty without causing the blades to sever an artery or cause further injuries, he said.

The rotavator blades had penetrated a leg and were sticking out the other side.

Mr Bruce continued: “It was completely through his leg.

“We had to dismantle it – it was millimeter by millimeter.

“He went to hospital with the blades still inside.”

Mr McQueen was conscious but heavily sedated throughout the operation.

Mr Bruce, who has 30 years experience on the fire service, said: “He was just rotavating his garden.”

The firefighters included crew commander at Haddington fire station, Stuart Dickson, who grew up in the same street as the casualty and has known him for 40 years.

After finding his friend caught in the rotavator’s blades, Mr Dickson helped carry out the rescue operation.

The firefighter, who has been in in the fire service for 22 years, said: “He was coping very, very well.”

Mr McQueen was then taken to Edinburgh Royal Infirmary with part of the machine still in his leg.

His condition is unknown.

A Scottish Fire and Rescue spokeswoman said: “Fire crews attempted to remove part of the rotavator from him and assist police and ambulance to stabilise and release him.

“This was a particularly difficult incident.”

A top-of-the-range rotavator can cost up to £990, with a nine horsepower diesel engine and 30cm diameter blades which can spin at to 3,600rpm.