A SECOND cat in nine months has been found wandering the streets of the same Fife town after mysteriously travelling hundreds of miles from England.

Pablo, a nine-year-old silver tabby was reported missing in October 2012 by his owner Siobhan Campbell in Lewisham, South East London.

The travelling tom had been missing for so long his owners thought he was dead, until he was found 400 miles away on Friday last week outside the Lloyds Bank on Queensferry Road, Rosyth. 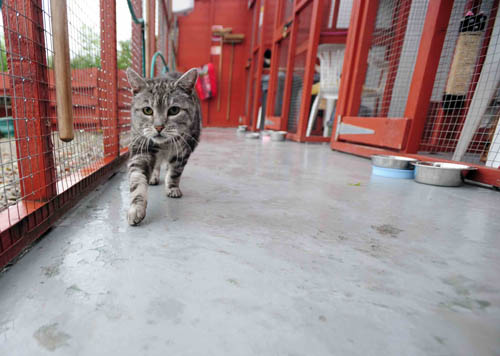 In February this year, another cat was found abandoned in Rosyth. A check of its microchip showed it came from Plymouth, Devon – 500 miles away.

Animal rescuers remain baffled by both cats’ amazing journeys across the country.

Pablo is now set to be reunited with his owner, who was “flabbergasted” by the news and admitted they had “given up all hope.”

Cat Protection Co-Ordinator Anite Guy put Pablo in a cage and took him to a nearby vets to be looked at and scanned for a microchip.

Ms Guy said: “It’s amazing. Goodness knows how he got from London to Rosyth. He must have been terrified.

“When we called his owner she couldn’t believe it. They thought he was dead because he had been missing for a year.

“He maybe hid in a removal van or sneaked into something.

It just goes to show microchipping does work – if everybody microchipped there would be few strays in the world.”

Lloyds Banks staff put Pablo out when he wandered in around lunchtime, but the clever cat snuck back inside by stepping on the automatic door mat.

The cat charity is hoping to fly him home with the help of donations from West Fifers as a car or train journey would be too long.

Owner Siobhan’s mum Kate Partridge said: “ It was weird, I was just thinking on Thursday that it was October and it’s been a year since he went missing.

“On Friday I got the phone call saying he’d been found.

“We were flabbergasted. I had given up all hope and its great to hear he was still alive.

“I was in a state of shock for a good couple of hours.

“We checked all the homes in the street where he used to hang out after he went missing and we thought he would turn up after a few days but it just got longer and longer.

“It’s absolutely extraordinary. We don’t know if he’s been in Rosyth for a couple of weeks or longer and we will never find out.

“Maybe someone will come forward with further information.”

His delighted family can’t wait to have him home, Kate joked: “He’ll probably take one look at us and think, ‘Ooh, I’ve been trying to get away from them for a year.”

In February of this year a two-year-old black and white cat named Meatball was found struggling to walk in Rosyth, microchipping traced his address to Plymouth.

Meatball was found with a wound on his tail and a severe injury to his back leg which was so badly damaged it had to be amputated.

At the time there was speculation that the owners may have moved from Plymouth to Scotland and not updated the information on the microchip.