SCOTLAND’S fattest hedgehog has shed almost half her bodyweight after being put on a diet by an animal rescue centre.

Edinburgh the hedgehog made national headlines in the summer when it was revealed she tipped the scale at 2.3kgs – making her too fat to roll up.

But after going on the “H-plan” diet of one bowl of dried meal worms a day, Edinburgh has shed a kilo (2.2lbs) and is on course to be released back into the wild in the spring. 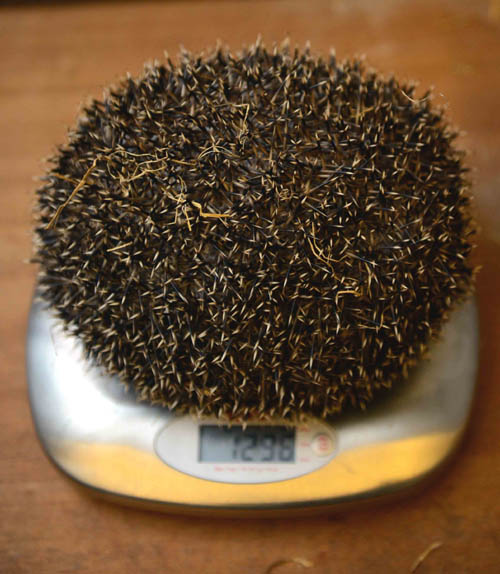 The monster hog weighed a pathetic 400 grammes when she was rescued – in Edinburgh – almost a year ago.

But she took rather too well to the regime at Sandy Boyd’s hedgehog rescue centre in Fife, munching her way through pounds of cat food and ballooning to over 5lbs.

Sandy, 74, took drastic action, cutting her back to a daily hamster bowl of worms and plenty of exercise.

Edinburgh is well on target to shed another 300 grammes, something that is expected happen as she hibernates over the autumn and winter.

Sandy, who is based in Wormit, just across the Tay from Dundee, said: “She’s lost a fair amount of weight because I’ve had her in the outside run and is doing really well.

“She can almost curl up into a tight ball but still has a wee bit of a belly but that will come off during her hibernation.

“Most of the others have gone to sleep now but she’s still up running about every night.”

He added: “I still give her a wee bit of a treat now and again but her portions are now a lot smaller.”

Sandy and his wife, Alice, 70, have been running the shelter for 19 years, caring for the creatures until they can be released into the wild.

And the animal lovers are now up for an award for their services to the environment.

The centre has been nominated for a Glenfiddich Spirit of Scotland award and Sandy finds himself up against some stiff competition including Scotland’s own wildlife photographer, Gordon Buchanan.

Voting closes on November 7 but Sandy is confident he could be in with a very good chance to secure the two-night stay at the luxury Meldrum House country hotel in Aberdeenshire.

He said: “It’s so nice that exactly 19 years on from the very first hedgehog I rescued, I’ve been nominated for an award. I’m hoping that my campaign will be enough because winning would be very nice.”