A BADLY-neglected eagle is learning to soar high again – thanks to a fishing rod repair kit.

Hagar had been kept in unsuitable accommodation and most of his wing and tail feathers were broken, meaning he could not fly properly.

The 14-year-old raptor – a cross between a Steppe eagle and a golden eagle – was aggressive and suffering “trust issues”.

But resourceful staff at a falconry centre in Kirkcaldy, Fife, came up with an ingenious way of getting Hagar back into the skies.

They used carbon fibre rods from a fishing rod repair kit and glued them to “donor” feathers from other birds.

In all, the team at Elite Falconry created 17 artificial feathers ranging in length from 16 – 20 inches.

These were then glued to Hagar’s wings, allowing the bird to take off immediately and fly perfectly. 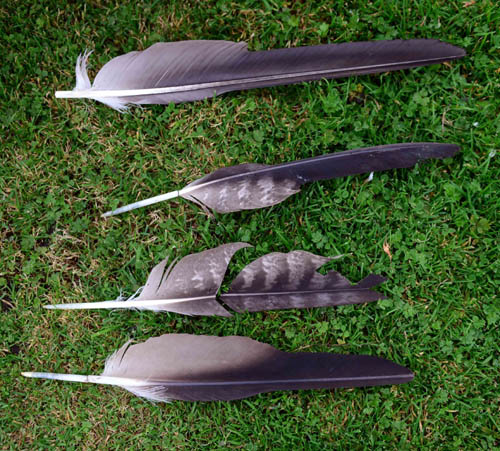 Manager Barry Blyther said: “When Hagar came to us he was a mess.

“We suspect his diet was poor and his accommodation and conditions were not appropriate for a bird of his size.”

Barry, 46, added: “When feathers break, a bird loses their balance and cannot fly to their full ability.

“This can result in them not being able to successfully catch prey and feed themselves, so they can become demotivated.”

Gluing donor feathers to birds of prey is known as “imping” but it could not be done in Hagar’s case because he is a hybrid.

Barry said the carbon fibre rods with feathers attached were cut to the precise size using scissors and glued into the stump of the broken feather on the wing or tail.

The artificial feathers are allowing Hagar to maintain his flying skills, strength and agility while the natural replacement feathers grow underneath. 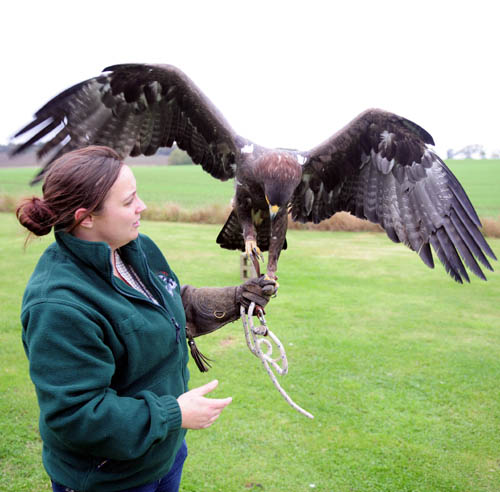 He said: “He was really well behaved. We didn’t put him to sleep because we are professionals and can carry out the procedure without distress to the bird in question.

“The change is him when he flew with his own feathers was incredible – you could tell the difference immediately.”

Elite Falconry was set up in 1998 and trains hawks, eagles, falcons, vultures and owls to behaviour in a trained and controlled state while retaining their natural instincts and behaviour.